Difference between Atmosphere and Environment

Key Difference: The atmosphere is defined as a band of gases that envelop the surface of the earth, whereas the term environment refers to all living and non living things occurring and forming the totality of surrounding conditions. 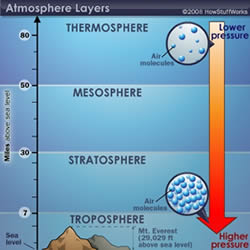 Earth’s ecosystem consists of biosphere, hydrosphere, lithosphere and atmosphere. The atmosphere can be defined as a band of gases that envelop the surface of the earth. It consists of 78 per cent nitrogen, 21 per cent of oxygen and 1 per cent of other things. Atmosphere word came into existence in the seventeenth century. Scientists used the Greek word atmos and sphere meaning vapor and sphere respectively, to make the term known as atmosphere. The atmosphere mainly consists of four different layers separated by boundaries. These layers are:-

1. Troposphere: - It is closest to the earth.

3. Mesosphere: - Most meteors from space burn up in this layer and this is above the stratosphere.

4. Thermosphere: - It is the biggest of all the layers of the earth’s atmosphere and is placed directly above the mesosphere.

The present condition of the atmosphere is defined by weather and it is described after observing temperature, air pressure, humidity, wind, cloudiness and precipitation. Climate change, protection of the ozone layer and air quality are some of the challenges to the atmosphere. The word atmosphere can also be used to describe the feeling of a place. For example, one may say “I like the artistic atmosphere of this café”. Here in this sentence, it is not referring to envelop of gases but rather the feel of the café. The context can be used to define a surrounding influence.

The term environment refers to all living and non living things occurring and forming the totality of surrounding conditions. It includes the air, water, plants, animals and many numerous things that are a part of our surroundings. The environment affects the individual and thus the nature of the survival of an individual is determined by the environment. In simple words, if we say that we have less water pollution then it means that it is safer for mankind to sustain in such an environment. Environment plays a vital role in developing lives of people. 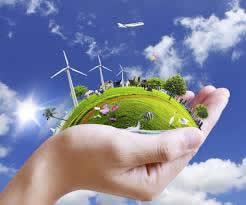 A good environment indicates that it is suitable for the living beings, whereas in certain conditions like various types of pollutions the environment becomes a threat.  Environmental studies are now considered a separate discipline for studying and analyzing the issues related to the environment.

This meaning of environment has given rise to many words like workplace environment, etc. which relate to the surroundings but in some limited manner. For example, in the sentence, “I really like the workplace environment of this company”. In this sentence one is referring to the surroundings limited to the internal settings of the company. It will not include the objects outside the company. It may also be used to define the settings or conditions in which the activity is taking place. For example: “this school provides an apt learning environment” for the students.

Region of atmosphere beyond thermopause is known as the exosphere. It is the uppermost layer of the earth’s atmosphere and very thin compared to the lower atmospheric regions. It is mainly composed of Hydrogen and Helium and atomic oxygen. The region beyond the exosphere is the outer space.