Key Difference: Atomic mass is simply the mass of a specific isotope, or the combined mass of the atom’s protons, neutrons and electrons. Atomic number is the number of protons that is found in a nucleus of an element.

Let’s face it chemistry is confusing, the various amount of elements, atomic numbers, bonds, mass, weight, atoms, etc. All these words start to blur after a certain amount of time that a person can no longer distinguish one from the other. Well atomic mass and atomic number are two of such words that are often confused and used interchangeably.

Atomic mass is simply the mass of a specific isotope. An isotope is a variant of a particular chemical element. All the isotopes share the same number of protons, but the number of neutrons differs in each isotope. The mass of an atom includes the combined mass of the atom’s protons, neutrons and electrons. The atomic mass is sometimes incorrectly used to describe relative atomic mass, average atomic mass and atomic weight. However, they differ from atomic mass slightly. 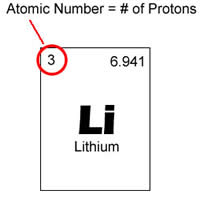