Difference between Aun and Todavía

Key Difference: In Spanish, aun and todavía are generally used as adverbs. Aun exists in two forms - one with ‘tilde’ (AÚN) and the other without ‘tilde’ (AUN). Aún is similar to Todavía meaning even, yet or still. Therefore, the two adverbs can be placed before or after a verb interchangeably. However, aun is generally used in situations with presuming conditions. 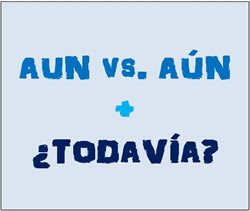 Spanish is an interesting language that forms a part of the Ibero-Romance group of languages. There is often confusion between aun, aún and todavía in Spanish. Aún and todavía are used to denote “even,” “yet” or “still.”  However, mostly they refer to ‘still’. Both can be used in place of each other to denote still, even or yet.

Are same; referring to - Are you still here?

Similarly, in the sentence "todavía puedo viajar", 'todavía' can be easily replaced by 'aún' like - " aún puedo viajar". They both mean - "I can still travel".

Aun also appears in two forms, therefore a lot of confusion arises that which one would be more suitable in a given situation. The two forms are aun and aún. Aún is accented and aun is unaccented. Aún is used as an adverb just like todavía. However, aun is generally used as a conjunction.

For example, in the sentence-

Comparison between Aun and Todavía: