Key Difference: Atmospheric pressure is a force in an area pushed against a surface by the weight of air in Earth's atmosphere. A barometer measures Barometric Pressure, which in most common instances is synonymous with Atmospheric Pressure. One of the basic laws of physics is that everything must have mass, no matter how insignificant. As it has mass, then gravity must act upon it, and hence it must also have weight. Weight is nothing more that the force of gravity acting upon mass. This also applies to things that we generally do no consider being heavy, such as air.

Pressure is basically the ratio of force to the area over which that force is distributed. This basically means how much something is pushing on something else. For example, say you have a heavy book on top of your head. You feel the weight on top of your head because the book is exerting pressure on you. Similarly, the air also exerts pressure against everything it touches. This pressure is called the Atmospheric Pressure.

A barometer is device which allows one to measure Atmospheric Pressure. This is an important device, as changes in atmospheric pressure can forecast short term changes in the weather. A barometer in an important tool for a meteorologist, as it can help predict a storm, cyclone, typhoon, hurricane, etc. 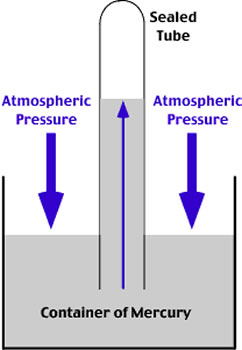