Difference between Bisque and Chowder

Key Difference: Bisque is a French smooth, creamy, and highly seasoned soup. Bisque is mainly made from seafood, especially crustaceans, such as lobster, crab, shrimp or crayfish. Chowder, on the other hand, is a French smooth and creamy seafood or vegetable stew. It is often served with milk or cream and is mostly eaten with saltine crackers. 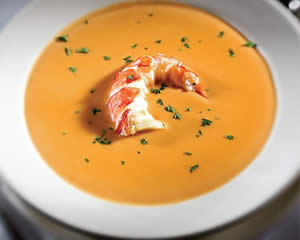 There is no better comfort food than soup. However, as any soup connoisseur knows there are many different types of soups. Two of which are Bisque and Chowder. While, some soups are easy, bisque and chowder are very similar, hence leading to confusion. However, what many people don’t realize is that chowder is in fact not a soup, but a stew, which makes it completely different from the Bisque soup.

Despite this fact, the two are quite similar. Firstly, they are both primarily made from seafood, especially shellfish. However, recently both bisque and chowder have seen vegetarian options, in which they are of course not made from seafood but rather from a variety of vegetables.

Bisque is a French smooth, creamy, and highly seasoned soup. The name ‘Bisque’ is believed to have originated from Biscay, as in Bay of Biscay. However, it is more commonly believed that the term comes from the French, ‘bis cuites’, which means twice-cooked. It is a reference to that fact that the seafood in the bisque is actually cooked twice before serving. In fact, this term is also the origin for ‘biscuits.’

Traditional bisque is mainly made from seafood, especially crustaceans, such as lobster, crab, shrimp or crayfish. In an authentic bisque, the shells are roasted then simmered to produce a highly flavorful stock. The shells are then  ground to a fine paste and added to thicken the soup. The meat itself is added to the bisque near the end of cooking.

Nonetheless, the modern bisque can also be made from roasted and puréed vegetables, fruits, or fungi. Here, the bisque can be thickened with rice, which can either be strained out, leaving behind the starch, or pureed during the final stages. Another method of thickening the bisque is by using roux, which is made from equal parts fat and flour. 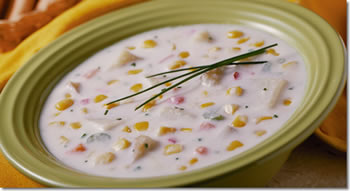 Chowder, on the other hand, is a French smooth and creamy seafood or vegetable stew. It is often served with milk or cream and is mostly eaten with saltine crackers. In fact, in some variations of the chowder, the chowder is thickened with broken up crackers, while other varieties are traditionally thickened with crushed ship biscuit. Some modern variations are thickened with hearty vegetables, like potatoes.

The term chowder is believed to originate from the French word ‘chaudière’, which was a type of cooking/heating stove, probably on which the first chowders were probably cooked.

A famous type of chowder is the New England clam chowder, which is made with chopped clams and diced potatoes, in a mixed cream and milk base, often with a small amount of butter. Another variation is the Manhattan clam chowder, which substitutes tomatoes for the milk and cream and typically omits potatoes. Corn chowder substitutes corn for clams. Potato chowder is made with cheese.

Comparison between Bisque and Chowder: