Key difference: Sugar is the generalized name for sweet-flavored food substances. Sucrose, table sugar or white sugar, is mainly extracted from either sugarcane or sugar beet. The current biggest source of white sugar is sugarcane. This sugar, i.e. processed from sugarcane, is called cane sugar. However, a more recent and a growing source for sugar has been beet sugar. Beet sugar is produced from sugar beet, a plant whose tuber contains a high concentration of sucrose. 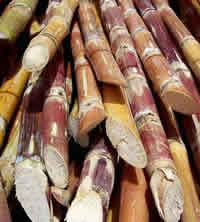 Sugars can be made from a variety of different substances. Fructose, also know as fruit sugar, is a naturally and most commonly produced sugar in fruits and plants. Fructose can be found in honey, tree and vine fruits, flowers, berries, and most root vegetables. Fructose is not synonymous with high fructose corn-syrup (HFCS), which is an artificially created and processed sweetener.

While, the white sugar that we commonly use is sucrose, also known as saccharose. Sucrose appears as a white, odorless, crystalline powder with a sweet taste. As a disaccharide, it is made up of two molecules; one of glucose and one of fructose via a glycosidic bond. Sucrose is mainly found in sugarcane and beet roots, from which majority of the table sugar is processed. Sucrose is also found in molasses, brown sugar and maple syrup. Fruits usually contain small amounts of sucrose and varying proportions of fructose and glucose.

Sugar became a popular sweetener in the 18th century, after sugarcane plantations were set up in the West Indies and Americas. However, sugar was being produced as far back as the ancient times in India, and subsequently in China. After the 18th century, sugar was very popular, but rare, and it could only be afforded by the wealthy. Hence, sugar was often called “white gold.”

Sucrose, table sugar or white sugar, is mainly extracted from either sugarcane or sugar beet. The current biggest source of white sugar is sugarcane. This sugar, i.e. processed from sugarcane, is called cane sugar. However, a more recent and a growing source for sugar has been beet sugar. Beet sugar is produced from sugar beet, a plant whose tuber contains a high concentration of sucrose.

Cane sugar is processed through a long process. First the juice is extracted from the sugarcane, and is then purified with lime and heat. Then it is further processed, and it eventually separates into sugar crystals and molasses. The sugar crystals are bleached and refined to give the end product, which we buy at the supermarket. This is the traditional white sugar.

Beet sugar, on the other hand, has a further simplified process of extraction and production of sugar. The sugar beets are sliced, boiled and pressed down to a thick syrup. The sugar is then extracted from the syrup and dried. The production process of beet sugar is considered to be one-layer process, as it only requires one treatment at a single plant. The production of cane sugar, on the other hand, requires two different processes and at two different facilities. 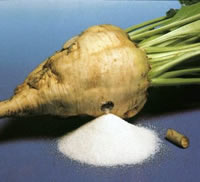 Also, growing sugar beets is easier than sugarcane. Sugarcane can be very temperamental and requires the right tropical climate to grow, whereas sugar beets are not so. They can grow in a variety of temperate climates, even with cold winters. This gives some countries the option of producing sugar inland, as opposed to importing expensive cane sugar.

Other than these said differences, there are no notable differences between the two. In fact, many producers often switch the source of sugar between beets and cane, and sell them in the same packaging, while the consumers are none the wiser. Both, beet sugar and cane sugar have the same physical look. They are both 100% saccharose (sucrose), with the same chemical makeup. They are 99.95% similar to each other, and people have different opinions about whether or not this 0.05% matter or not. Most cannot notice a difference, while some claim that the cane sugar is better for baking as the end product is softer, chewier and sweeter. While, end products with beet sugar turn out drier and crumby. However, it is unsure how much of this difference is actually because to the sugar, and how much of it can be attributed to the taste preferences of the tasters.

Other than cane and beet sugar, many other forms of sugar, i.e. processed from other sources are available on the market. Sugar can be derived from honey, many fruits (such as dates and coconuts) and tree saps. Some of the various types of sugar available on the market are palm sugar, some forms of fruit sugars and various different types of sugar syrups, including honey, maple syrup, corn syrup Agave syrup, Yacon syrup, rice syrup, etc.

Why does beet sugar smell off and a little held in my mouth feel bitter? It's sad because I'm proud of my state and there's a lot of sugar beet production but I'm not comfortable eating the sugar. This is been a long time issue for me, before I even knew some sugar came from beets; I just knew there was some sugar that felt weird to me.

So why do hummingbirds prefer cane sugar oppose to beet sugar?