Cardiac arrest and cardiogenic shock are two medical conditions that go hand-in-hand. These two conditions are related to the heart and its ability to pump blood to the rest of the organs in the body. Many people that are not well-versed with medical terms can often confuse the two terms as they have similar meanings. Cardiac arrest is when the heart cannot contract properly and fails to provide blood to the rest of the body. Cardiogenic shock is the heart failing to function properly due to a certain condition such as damage or an arrhythmia. 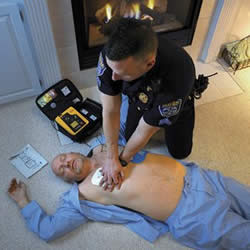 Cardiac Arrest is a heart condition where the heart does not contract properly, thereby failing to effectively circulate blood to the other organs. Cardiac arrest is brought on by irregular beating of the heart that causes it to stop supplying blood flow to the other organs, including the brain. Cardiac arrest is also known as cardiopulmonary arrest or circulatory arrest. The heart has an internal electrical system that allows it to control the rhythm of the heart; any changes to the rhythm can cause the heart to either beat too fast, too slow or stop beating completely. These changes are known as arrhythmias. The lack of blood flow leaves the other organs starved for oxygenated blood. The lack of oxygen to the brain causes the person to faint. If the person does not receive help during the first five minutes of fainting, it can result in permanent damage to the brain.

Cardiac arrest can be a cause of Coronary heart disease, cardiac abnormalities such as cardiomyopathy, cardiac rhythm disturbances, hypertensive heart disease, congestive heart failure, etc., trauma, overdose, drowning, smoking, obesity, lack of physical exercise, etc. Cardiac arrest brought on suddenly is known as Sudden Cardiac Arrest (SCA) and causes the heart to stop beating completely. Cardiac arrest differs from heart attack as in a heart attack, the heart does not receive the oxygenated blood and all the while it continues to beat and pump until the cells die completely. In cardiac arrest, the heart itself stops beating, though it still receives constant supply of oxygenated blood.

Symptoms of cardiac arrest include fainting and loss of pulse or heartbeat. The person stops breathing as the heart no longer pumps. The person that suffers a cardiac arrest must receive quick cardiopulmonary resuscitation (CPR) to keep the heart pumping the brain from losing cells. The longer it takes the person to receive help, the more chances that they may have loss of memory, brain damages or less chances of survival. Defibrillation (or shocking the heart) is another way to revive the heart. Implantable cardioverter-defibrillators (ICDs) and pacemakers are used to ensure that the person does not suffer from another cardiac arrest episode in the event of arrhythmia. 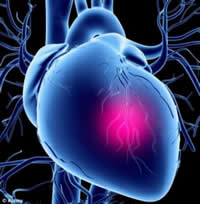 Cardiogenic shock is a medical term that is used to describe when the patient is unable to properly circulate blood due to the heart ventricles failing to function properly. The inability to function properly can be caused by a number of reasons such as a heart attack, damage to the heart muscle, arrhythmia, cardiomyopathy, cardiac valve problems, aortic valve stenosis, aortic dissection, systolic anterior motion (SAM) in hypertrophic cardiomyopathy or ventriculoseptal defects. Cardiogenic shock can also cause cardiac arrest, where the heart stops pumping blood to the other organs.

The heart is responsible for transferring oxygen and nutrients to the other organs in the body. When a person goes into a cardiogenic shock, the heart is unable to pump enough blood to the other organs. This results in cells to die from hypoxia (oxygen starvation) and hypoglycemia (nutrient starvation). Echocardiograms and ultrasounds are used to determine the exact reason for the cardiogenic shock, which allows medical professionals to treat the patient based on their diagnosis. Treatments are done based on the conditions brought on by the shock. Time is a huge factor when it comes to any medical condition related to the heart. The longer the heart is unable to work, the longer the cells do not receive oxygen or nutrients. In many cases, cardiogenic shock is an irreversible process and results in death. However, again time is a big factor. If the doctors can diagnose and start treatment fast, there are higher chances that the person will survive.