Difference between Cell and Battery

Key Difference: Cell is an electrochemical cell that derives electrical energy from spontaneous redox reaction inside the cell. A battery is basically nothing but a stack or pile of electrochemical or galvanic cells.

Batteries are an important invention to the society; they are used in almost all applications including flashlights, cell phones, clocks, alarm clocks, etc. Imagine a world where batteries did not exist and everything would run only on electricity, the amount of wires that would be around would be annoying and hazardous. Batteries are being constantly evolved with the views on trying to find substances that would retain charges for longer amounts of time. Batteries are also playing an important role in mobility, with the electric cars becoming popular. Batteries and cells are more similar, as cells are what power the battery, while the battery powers the device. 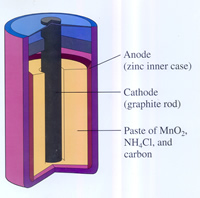 Cell is the generic name for the galvanic cell or the voltaic cell. It is actually an electrochemical cell that derives electrical energy from spontaneous redox reaction inside the cell. The cells are responsible for converting chemical energy into electrical energy for powering an electrical device. These cells are commonly made up of two different materials that are connected by a salt bridge or are individual half-cells that are separated by a porous membrane. The electrochemical cell was discovered by Luigi Galvani in 1780, when he connected two different materials (copper and zinc) and connected both to different parts of a nerve of a frog’s leg, which caused the leg to contract even after the frog was dead. He dubbed this as ‘animal electricity’. However, this wasn’t the first cell that was invented. The earliest known battery was dated back to ancient Parthia, where jars full of citric acid or grape juice were used to produce a voltage. There were termed as the Baghdad battery and the German director of the National Museum of Iraq Wilhelm König claimed in 1940 that these were similar in workings to a galvanic cell.

An electrochemical cell consists of two half-cells. Each half-cell consists of an electrode and an electrolyte. The two half-cells could use same electrolyte. During the reaction, the species from one half-cell lose electrons (oxidation) to their electrode while the species other half-cell gains electrons (reduction). The salt bridge or porous disk is employed to allow ionic contact between the two halves without mixing the solutions. As the electrons are transferred from one side to the other, the difference in charges are established. The salt bridge allows the ions to maintain a balance between the oxidation and reduction. The two electrodes are known as the anode and the cathode and both are connected to a high resistant voltmeter. The voltmeter helps the electrodes to maintain a voltage. The difference between the charges is then converted in to electrical energy to be used in portable gadgets.

A battery is basically nothing but a stack or pile of electrochemical or galvanic cells. Italian physicist Alessandro Volta is credited with inventing the first battery in the 1800 by piling many cells in a series. The term ‘voltaic cell’ or ‘voltaic pile’ is given in honor of Volta. However, he was not the person to invent the term ‘battery’.  The pile of cells is known as ‘battery’ because of Benjamin Franklin. He was the first person to put the term ‘battery’ into usage. Franklin described multiple Leyden jars (which were used as capacitors) as battery, referring to the analogy to a battery of cannons. Battery of cannons is usually a term to describe a line of cannons that are placed at a regular interval to make it easy for firing.

There are also different number of battery cell types which include wet cell, dry cell, molten salt and reserve. Wet cell battery has a liquid electrolyte, while the dry cell has an electrolyte that is immobilized as a paste, which is only liquid enough to allow the flow of electrons. Molten salt batteries use molten salt as an electrolyte. These are often used in electric vehicles; however they must be properly insulated as this type of battery generates a lot of heat. A reserve battery is a battery that is often stored in an unassembled form and only activates when the inner parts are assembled. These batteries can be stored for long periods of time and are often a part of emergency kits. These batteries only provide power for a few minutes.

Batteries can also be made up for different types of materials such as alkaline, lithium-ion, mercury, zinc-carbon, nickel-zinc battery, lead-acid battery, fuel cell, etc. The usual voltage for an alkaline battery is 1.5 V and the voltage can be increased by adding on more batteries. The different sizes of batteries includes (4.5-Volt, D, C, AA, AAA, AAAA, A23, 9-Volt, CR2032, LR44 etc.) Depending on application of the battery, the cells are combined to provide a higher voltage, for example a 9-Volt battery would have 6 alkaline cells with a 1.5 V charge. A 9-Volt battery is used in the heavy duty flash lights. The most common type of battery that is used on the market is an AA battery or an AAA battery.