Key Difference: Central Time Zone is a zone that falls in parts of Canada, the United States, Mexico, Central America, some Caribbean Islands, and part of the Eastern Pacific Ocean. Eastern Time Zone is a zone that is shared by 17 states in the United States, parts of Canada and a few countries in the South America. The main difference between different time zones is the time they observe due to the rotation of the earth on its axis.

Time Zones are regions on earth, divided along the longitude, that use the same standard time. The 40 different zones are offset from Coordinated Universal Time (UTC), synonymous with GMT, but GMT is no longer precisely defined by the scientific community. The UTC was standardized in 1961 by the International Radio Consultative Committee and is based on International Atomic Time (TAI); a time standard calculated using a weighted average of signals from atomic clocks located in nearly 70 national laboratories around the world. Large countries like the United States and Canada experience more than one time zone in the same country and have given the zones specific names in order to distinguish them from each other; Eastern Time Zone, Central Time Zone, Mountain Time Zone and Pacific Time Zone. 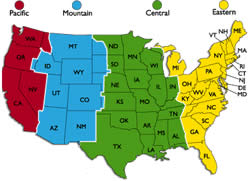 The province of Manitoba in Canada is the only province or territory in Canada that observes Central Time in all areas, with the others overlapping in other time zones. In the US, states such as Arkansas, Illinois, Iowa, Louisiana, Minnesota, Mississippi, Missouri, Oklahoma and Wisconsin fully follow the Central Time Zone, other states: Alabama, Florida, Kansas, Michigan, etc fall halfway between Central Zone and either Eastern or Mountain Time Zone. Most of Mexico also falls in the Central Time Zone, with the exception of Baja California Norte, Baja California Sur, Chihuahua, Nayarit, Sinaloa, and Sonora.

Eastern Time Zone is a zone that is shared by 17 states in the United States, parts of Canada and a few countries in the South America. Eastern Time Zone is 5 hours behind the UTC/GMT and 4 hours behind when observing day light savings. The Panama, Caribbean, and a few regions of Canada do not observe day light savings. In Canada, major parts of Ontario and Quebec fall under this time zone.

While, 17 states in the US fall completely under this time zone, 6 states: Alabama, Florida, Indiana, Kentucky, Michigan and Tennessee; also fall under the Central Time Zone. Washington DC, the capital of US also falls under the Eastern Time Zone.

The main difference between different time zones is the time they observe due to the rotating of the earth on its axis.