Key Difference: Chrome Web Application are nothing but applications that can run inside the browser and it virtually takes up no additional space on the computer. On the other hand, extensions affect the global layout of the browser. Extensions provide functionality and easy access, but they do not have their own UIs. 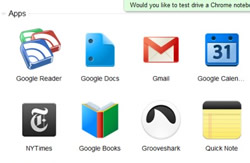 Google Inc. is one of the fastest growing companies on the planet. It is a multinational corporation currently based in Mountain View, California, USA. It was founded by Larry Page and Sergey Brin while both were PhD students at Stanford University. Google was first incorporated as a privately held company on September 4, 1998, and its initial public offering was on August 19, 2004. Together, Brin and Page own about 16% of the company's stake.

The term ‘google’ has also become a huge trend because of its search engine, Google. Google was initially started as a search engine and now has expanded into many different fields including browsers, phones, operating systems, technology wear (Google glass), etc. Google is most popularly known for its search engine, followed by its browser Google Chrome. Chrome is a popular free web browser that allows users to access the Internet and view web pages.

Chrome Web Application and Extensions are two different features that are offered by Google for its browser. These are often confusing for many people as they seem to serve a similar purpose. However, these are different from each other in many ways. Extensions were initially made popular by Firefox, which allowed users to download these extensions to make the browser more user friendly. Now, many different browsers offer the same services in a bid to make their browsers more attractive to users. 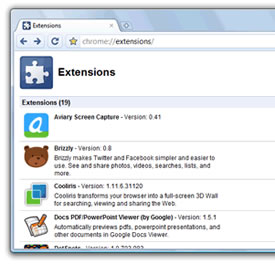 Chrome Web Application are nothing but applications that can run inside the browser and it virtually takes up no additional space on the computer. Google issued a statement explaining web apps as, “something more rich and interactive than a website, but less cumbersome and monolithic than a desktop application.” Apps have their own user interface (UI). These apps can be purchased or downloaded from the Goople Apps Store and show up on the browser as an icon when browser is opened. Different types of Google web apps include Gmail, Google Docs, Games, etc.

On the other hand, extensions affect the global layout of the browser. Extensions provide functionality and easy access, but they do not have their own UIs. Extensions are downloaded onto the harddrive and added to the tool bar of the browser. This allows the user to easily access the add-on by clicking on it. The add-on will be visible on all of the web pages or browsers that are open. These can also be used to change the behavior of the website or alter objects on the web page. For example, a currency converter extension added could convert all the currencies on the webpage.

In terms of comparisons, Google states, “Compared to apps, extensions cut across websites and web apps; they are usually in effect across all websites (though some are site-specific). Apps don’t combine with other apps in this way; they run standalone, like any regular website.”