Difference between Continent and Subcontinent

The terms continent and subcontinent are used in similar context by people, which can be confusing. This article helps differentiate between the two terms. A continent is a large continuous landmass. It is a part of the Earth. There are seven continents: Asia, Australia, Antarctica, Africa, North America, South America and Europe. Australia and Antarctica are the two exceptions, since both are considered as countries as well as continents.

Continents are described by the means of tectonic plates. Plate tectonics is the study of continental drift i.e. the movement, collision and division of continents.

Continents are considered to be large, continuous and discrete masses of land which are separated by the expanses of water. It is a land mass that is divided into regions, referred to as countries which are unequal in size. A continent is independent in nature and just a separation by the geographical boundaries. In geology, the large area of land is defined as continent and the large area is a reason for the less number of continents in the Earth. Continents are home to numerous countries in this world and countries in turn are home to many cities and towns. The people from the same continent may have certain similarities.

The term ‘subcontinent’ is defined as a large landmass, which is part of a continent but is considered as an independent entity geographically or politically. It is smaller than a continent. 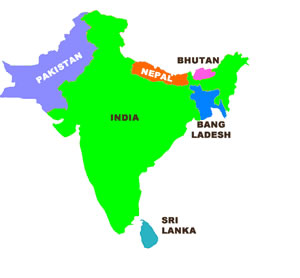 India is one example of a subcontinent because it is a part of the Asian continent. Its landmass is not connected to the Asian continent plate, thus not part of it. India is regarded as the largest nation in South Asia and also known as the South Asian subcontinent. The term is used culturally and politically. The phrase the Subcontinent, used on its own in English, commonly means the Indian subcontinent i.e. South Asia. It includes India, Pakistan, Bangladesh, Nepal, Maldives, Bhutan, and Sri Lanka. The region has wide geographical variations like desert, plateau, rainforest, mountains and a myriad of languages, races and religions.

Central America and the Middle East are also considered as subcontinents because their culture is distinct from the rest of their continent. Greenland is another example, which belongs to the continent of North America.

Comparison between Continent and Subcontinent: