Difference between Cricket and Baseball

Key Difference: Cricket is a sport that is played between two teams of 11 players each on a rectangular 22-yard long pitch. Baseball consists of two teams with nine players each that take turns batting/hitting and fielding/pitching. These games differ in terms of rules, regulations, gameplay, bat, ball, etc.

Cricket and baseball are two bat-and-ball sports that are favorite pastimes in many countries. These two are popular games and can be found in almost every country. Though these games are similar in nature and are both derived from England, they have various differences among them including rules, regulations, gameplay, bat, ball, etc.

Cricket is popular sport that is played between two teams of 11 players each on a rectangular 22-yard long pitch. Earlier forms of cricket have been traced back to the Tudor times in the early 16th century England. The earliest written evidence of cricket refers to the sport ‘creckett’ in 1598. Cricket became an organized sport played for high stakes during the 17th century. The main objective of the game is for the batsmen to strike the ball and then run across the pitch to try and accumulate ‘runs’ or ‘points’. The defense team, which is known as the fielding team, will try to catch the ball or to run the ball back to hit the wickets, which would cause the batsman to be out. The ball must hit the wicket when the batsman is not inside the boundary line. When the bowler bowls, the ball must hit the ground one time before the batsman can hit the ball. Another way to accumulate points in addition to running is to try and get the ball to go beyond the boundary line. If the ball rolls on the ground and touches or passes the boundary line this awards the batting team 4 runs, if the ball crosses the boundary line but does not touch the ground until after it crosses the boundary line, this awards 6 runs.

The cricket bat is flat on the striking side and has a ridge on the back. The bats are commonly created using willow wood and connected to a long cylindrical cane handle. Willow wood is popular and can sustain large amounts of force without denting or shattering. The handle is covered in a rubber grip. The lengths of the bats differ depending on the person and the game, while smaller bats have been made for children as well. However, a professional bat may be no more than 38 inches in height and 4.25 inches in width. Though there is no standard, the bats commonly weigh from 2 lb 7 oz to 3 lb.

The ball is made up of cork and is covered with leather. The ball is circular in shape and weighs between 5.5 and 5.75 ounces and measure between 8 13/16 and 9 inches in circumference. Two different balls are used depending upon the game and though they are designed the same way they differ in color. White balls are used for One Day International matches, while red balls are used for Test matches. The balls are hard and heavy and require the players closest to the batsmen, including the batsmen, to wear protective padding and helmets. The field is 66 feet; however a big part of the game is played on a small strip of dirt in the center. Penalties that can be awarded in the game include no ball, wide, bye and leg bye. While no ball and wide usually award one penalty run, bye and leg bye allow the batsman to acquire as many runs as he can. There are ten ways in which a batsman to be dismissed from the game: bowled, caught, leg before wicket (lbw), run out, and stumped, hit wicket, hit the ball twice, obstructed the field, handled the ball and timed out. Once the batsman is out, another batsman replaces him and the game resumes. The game ends when 10 out of 11 batsmen are out or the overs are finished. Each over consists of six balls and the overs in a game vary depending on the type of match. For example: T20 matches have 20 overs, while One Day matches have 50 overs. 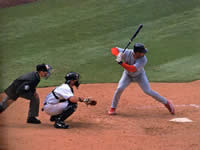 Baseball is a sport that is most popular in the United States, though it is also played in other countries. Earlier forms of baseball have been difficult to trace in origin, though it can be linked to a game played in France known as ‘la soule’ in 1344. The book “Baseball Before We Knew It: A Search for the Roots of the Game” by David Block suggests that the game originates in England. The book states that baseball was adapted from an older game called Rounders. The earliest known reference of baseball was found in a 1744 British publication “A Little Pretty Pocket-Book” by John Newbery, which shows similar set-up to baseball except the field, which was triangle in shape, compared to the diamond it is now. The game was brought to the United States by English immigrants. It started gaining popularity during the 1850s as a favorite pastime. By the mid-1850s, sixteen area clubs formed the sport's first governing body, the National Association of Base Ball Players.

The game consists of two teams with nine players each that take turns batting/hitting and fielding/pitching. The turns are described as innings, with each game consisting of nine innings. One team bats during the first half of the inning, while the second team bats during the second half of the inning. The objective of the game is to strike the ball and cover all the four bases without being touched by the ball and scoring ‘runs’ or ‘points’. The batter first hits from the home plate, after which he moves counterclockwise to the first base, the second base, the third base and then finally back to the home base in order to score a run. The team that is fielding will keep the batter from running the bases by touching him with the ball in order to make him out. When three outs are recorded, the teams switch role for the second-half of the inning. If the scores are tied after nine-innings, then extra innings are added to the game. In addition to scoring runs by running all the bases, the batter can also hit the ball in the air within the foul lines over the entire outfield and outfield fence; this can also result in a homerun.

The batter has three chances to hit the ball into the field. A pitch that is not hit is known as a strike and three strikes recorded against a player results in the batter being out. A strike is called when the batter lets a well-pitched ball go through to the catcher, the batter swings at any ball and misses or foul tips it directly into the catcher's hands or the batter hits a foul ball. There are five ways a batter can be dismissed: the strikeout, the flyout, the ground out, the force out and the tag out.

The baseball bat is a smooth metal or wooden round bat that has a round top and a flat knob at the bottom. The bat may be no more than 2.75 inches in diameter at the thickest part and no more than 42 inches long. The bat weighs no more than 33 ounces; however the weight can vary depending on the player. The baseball is made up of a mixture of cork and rubber, which is wrapped in yarn and then covered with leather. The ball is circular in shape and measures between 9 to 91⁄4 inches in circumference 27⁄8–3 inches in diameter. The ball should not weigh under 5 ounces or over 5 and 1/4 ounces. The field is 60 feet, 6 inches, with a diamond shape in one corner where the majority of the game is played.