Difference between DHTML and XHTML

Key Difference: DHTML (Dynamic HTML) is not a coding language but actually a collection of technologies that are used with HTML in order to make HTML more interactive. XHTML (Extensible Hypertext Markup Language) is coding language that is identical to HTML, however with a stricter set of syntactic rules that are based on the XML standard.

A lot goes into creating a simple web page, such as coding, placing, dynamic links, etc. During the start up stages of web browsers and web pages, HTML coding language would do the trick as the pages were simple and it did not require much interaction. However, as the pages became more complex and interactive, HTML could not fulfill all the requirements and additional technologies were added in order to make the pages more interactive, such as DHTML. DHTML and HXTML are related in the world of computing, but refer to two different things.

HTML (Hypertext Markup Language) is the original programming language that was used in order to develop web sites. It provided a simple tag-based syntax in order to create forms, em

bed pictures, links and other attributes. HTML is written in the form of tags, enclosed in angle brackets <>, which describe the tag and add content to it. HTML tags such as <h1>; <p1> lets the browser known what is enclosed in the tag, such as heading or paragraph. The tag is ended using the </h1> or </p1>. The first type of tag is known as start tag or opening tag, while the second tag is known as closing tag or end tag. The simplicity of HTML tags is what made it weaker as the lenient tags would put more work on the browser to decipher the page. As different browsers decipher pages differently, a coder designing a web page for one browser could not make the web page work properly in another browser.

DHTML (Dynamic HTML) is not a coding language but actually a collection of technologies that are used with HTML in order to make HTML more interactive. DHTML is an umbrella term for a collection of technologies such as HTML, XHTML, JavaScript, CSS and Document Object Model. A combination of these objects are used together in order to create more interactive and animated websites. One major difference between standard HTML and DHTML is once a page is loaded in standard HTML, it will not change until it receives another request from the server, however in DHTML, the elements are allowed to change at any time, without having to return to the server. Four primary features of DHTML include changing the tags and properties, real-time positioning, dynamic fonts specifically for Netscape Communicator and data binding for Internet Explorer. During the late1990s and early 2000s, DHTML was popularly used in order to create browser- based action games, however due to problems in loading for different servers, it proved difficult. 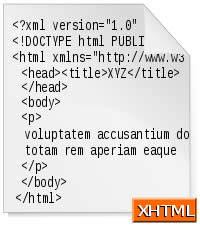 XHTML (Extensible Hypertext Markup Language) is coding language that is identical to HTML, however with a stricter set of syntactic rules that are based on the XML standard. It operates similarly to HTML, but it follows a strict set of rules, which when not followed causes the browser to generate an error code. For example, in HTML some tags can be left open and the browser will generate the data to its best ability, but in XHMTL all tags must have a proper opening and closing tag. XHTML is a combination of HTML and XML, a strict subset of SMGL. The proper tags allows easier for web pages to be rendered in almost any browser. It is a much harder language to learn language for beginners, but is still considered widely beneficial. It is considered better to code dynamic web pages using XHTML as it provides a better scalability and less cross-browser problems.