Difference between NGO and NPO

The words NGO and NPO have become synonymous in today’s world. We talk about NGO’s being NPO and vice versa, without giving it a second thought. However, these two are different from each other. NGO stands for Non-governmental Organization, while NPO stands for Non-profit Organization. 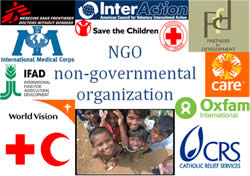 A non-governmental organization (NGO) is a legally constituted organization that is created by legal persons and is not affiliated with any form of government. The term originated from the United Nations and is used to refer to organizations that are not a part of the government and are generally not for profit businesses. The term NGO is applicable to organizations that pursue social and charity works. Though NGO are partially or fully-funded by the government, they maintain their distance from the government by excluding government representatives from membership in the organization. Famous NGOs include Red Cross Society and Rotary International. India is believed to have the most number of NGOs with the numbers crossing approximately 3 million. The organization works on hiring a paid staff as well as taking in volunteers. NGO’s work for causes such as human rights, health rights, free medical, poverty eradication, population control, relief works in disaster hit areas, etc. There are four different types of NGOs: Community-based organization, City-wide organization, National NGO and International NGO. Many NGOs are also considered as NPOs.

NGO.org defines ‘NGO’ as, “A non-governmental organization (NGO) is any non-profit, voluntary citizens' group which is organized on a local, national or international level. Task-oriented and driven by people with a common interest, NGOs perform a variety of service and humanitarian functions, bring citizen concerns to Governments, advocate and monitor policies and encourage political participation through provision of information. Some are organized around specific issues, such as human rights, environment or health. They provide analysis and expertise, serve as early warning mechanisms and help monitor and implement international agreements. Their relationship with offices and agencies of the United Nations system differs depending on their goals, their venue and the mandate of a particular institution.”

Non-profit organization (NPO) is an organization that uses its revenues and surpluses in order to fund other projects instead of giving them to share-holders as dividends. Other names for NPO include not-for-profit organization, nonprofit, non-commercial organization and NCO. An NPO is allowed to generate profit and surpluses; however instead of distributing it to its share-holders in forms of dividends and payouts, it must use this for purposes such as self-preservation, expansion, or plans. Dictionary.com defines, ‘NPO’ as “A corporation or an association that conducts business for the benefit of the general public without shareholders and without a profit motive.”

Many NPOs employ fully-paid staff including management and also has volunteers and executives that work without pay. In order to maintain its NPO status, a company must show all accounts and must be able to account for all funds, specially profits that were earned. Even excessive pay to employees or executives can cause the company to lose its status. The NPO status allows the company to be exempted from Income tax and must conduct business for the welfare of the general public. Some NPOs can also be charity, service organization or NGOs.  NPOs earn money through charities, foundations, grants, donations and government funds. Popular NPOs include Habitat for Humanity, Rotary International, Teach for America, etc. NPOs choose domain names such as .org or .edu in order to differentiate themselves from profit making corporations.

In some countries NGOs and NPOs are one in the same. Both the companies often work for the benefit of human welfare and to better the society. The majority of the difference lies in small details such as NPOs are exempted from tax, while NGO’s do not allow government representatives to become members of the organization.

you give better description, but thanks for above.