Key difference: Boiling is the process of bringing water to its boiling point, boiling for 3-5 minutes or more to kill any bacteria, viruses and germs present in the water. Distillation is more of an elaborate process. Water must be boiled, the water vapor must then be collected and condensed to kill any bacteria, viruses and germs, as well as get rid of any and all minerals dissolved in the water. 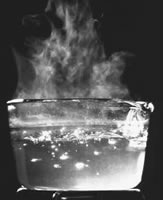 Nearly two thirds of land on earth is covered with water. Water is an essential substance on the plant and is necessary for the sustenance of life. It is tasteless, colorless, and odorless. It is mainly found in a liquid state; however it is also present in its solid and gaseous form. We use water for practically everything, cooking, cleaning, drinking, washing, bathing, etc. Even our bodies are significantly made up of water.

In humans, water is responsible for executing and helping in a number of body functions, which is why we should ensure that we are drinking water in sufficient quantities everyday. For purposes of drinking, one should always make certain that the water is safe from contaminants, as a number of them can easily dissolve in the water and make it unclean for consumption by humans. Water can also serve as a breeding ground for a number of bacteria, viruses, and parasites. While, there are many processes to achieve that purpose, two of the most commonly used are the process of distillation and the process of boiling.

Boiling water is a great and easy way to make water safe for drinking. It is one of the simplest and quickest methods and can effectively be used in cases of emergencies, when safe water is not easily available. Boiling is the process of bringing water to its boiling point, which is at 100 degree centigrade, by allowing it enough heat. Water should be boiled for 3-5 minutes or more if deemed necessary and should be allowed to cool while keeping it covered. If the water is cloudy or unclear, it should be filtered before boiling. Some effective filters can be a water filtration kit, coffee filters, paper towels, cotton towels, cheesecloth, or a cotton plug in a funnel.

Boiling water effectively kills bacteria, viruses, protozoans, parasites, pathogens, etc., while ensuring that water retains the minerals dissolved in it as well as the taste derived form the said minerals. Boiling will also drive out some of the Volatile Organic Compounds (VOCs) that might be in the water.

However, boiling is not effective to rid of any metals, nitrates or chemicals, such as lead, mercury, asbestos, pesticides, solvents, etc., which may have contaminated the water. Boiling may also concentrate any harmful contaminants that do not vaporize with the water vapor. Also, heat is required to boil the water and the process might not be feasible for some places or in emergencies where a reliable heat source is not available.

Distillation was the other water purification process as listed before. Distillation is more of an elaborate process than just boiling. However, boiling is the first step of this process. The water is boiled until it starts to evaporate into steam or water vapor. The water is then continued to boil, while the steam is collected into another container. After the steam condenses, it turns back into water. However, this water is pure water, i.e. it has no other contaminants, nutrients or minerals of any sort dissolved in it. The boiling also effective kills all the bacteria, viruses and germs present in the water. 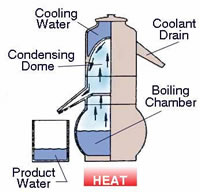 This is not an easy process to carry out, especially at home or in emergency situations as it can be only done with proper equipment, which is why it is mainly carried out in laboratories. Also, depending on the equipment used, the water may not be a hundred percent pure, but pure enough. Distilled water may also be distilled once again, to get the water as close to pure as possible. The process of distillation is effective enough to separate pure water form salt water, brackish water, murky water, and even urine. This makes distillation an ideal purification process in emergency situations where drinking water is not available.

The disadvantage of distillation is that it not only rids the water of all heavy metals, salts and other chemicals dissolved in it, but also minerals that are essential for humans, such as sodium, calcium, potassium, and fluorine, an element important for our teeth. This also in turns rids the water of the taste that we are used to, as this taste is a derived from the minerals in the water. So, the distilled water ends up tasting bland and devoid of taste, which might not be preferable to some.

Also, the volatile organic compounds may not be entirely eliminated from the water, as they are a type of contaminant that will evaporate and condense with the water vapor. However, one can use a vapor trap, carbon filter, or other device along with a distiller to ensure a more effective removal of contaminants.

Another disadvantage of distillation is that it is more time consuming than boiling and essentially more expensive. As the water must be completely evaporated and then contained and condensed, the entire process can take up to two to five hours to get just a gallon of distilled water. Also, most home distillers run on electricity, which is effectively more expensive than gas. Imagine leaving the electricity or even the stove for that matter, on for two to five hours. This will run up a significant utility bill. Also, likewise, distillation will not be effective in emergency situations where heat source or electrical power, is either not available or available in limited resources.