Difference between Downtown and Uptown 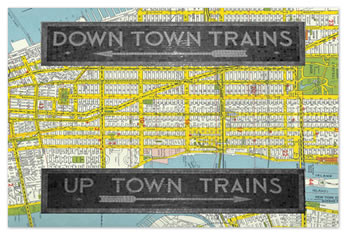 Many cities have a downtown section and an uptown section to their landscapes. While the usage may be commonplace for the residents of that city, it may be a bit confusing for visitors, who may have never heard of that terminology. This terminology is also often used only in major cities in North America, due to which it may be difficult to understand for people residing outside of that region.

The terms ‘downtown’ and ‘uptown’ in their current context are believed to have first been used in the context of New York City, where downtown referred to the original city at the tip of the island. However, as the city grew, there was nowhere for it to expand but inland, i.e. up on the island. Hence, downtown become the central hub of the city, where the old city and the businesses were located. Whereas uptown came to mean the upper part of town, i.e. the part of the town that is on the upper side of the island. As this part of the city was mostly residential at the time, uptown also came to be associated with the residential part of the city.

Additionally, the island of Manhattan is located on a north-south axis, and at the time, New York City exclusively meant Manhattan. Due to this, it is generally accepted that the downtown part of a city is located is the south part of the city, while uptown is generally located in the north.

However, there may be various exceptions to this, especially today as many cities have adopted the use of the terms downtown and uptown, though they may not necessarily exist on a north-south axis. In fact, in many cities, downtown is the formal name for the business section of the town. In some cities, uptown may be a completely different part of town, located miles away from downtown. 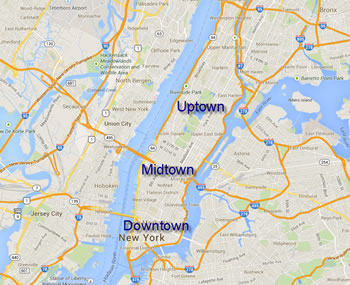 Today, the definition to downtown and uptown fairly the same as when it originated in New York in the 1830s. Downtown is primarily the commercial center of town, whereas Uptown typically refers to the residential parts of the city, which are often located on the outside of the commercial hub of the city.

As uptown is located further away from commercial activity, the pace of life tends to be slower in uptown. Hence, there is lower population density and more empty spaces, which result in more single family houses. However, in downtown space is usually limited as more and more people travel here for work. Also, what limited space is available must be shared for businesses and residences. Hence, this gives rise to more office complexes, and high-rises and apartment buildings.

Comparison between Downtown and Uptown: