Difference between Electric and Gas Ovens

There are two types of common stoves that people can install in their kitchens; Electric and Gas. The objective of both of these ovens are the same, for cooking, however they differ in various ways. Preference of either oven over the other depends on a person and how much they will be cooking or baking in these ovens. While some prefer gas to electric, or vice-versa, both have distinct differences that one should consider before buying either. 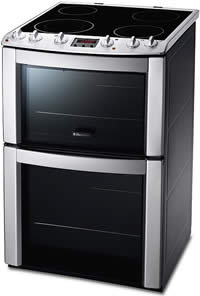 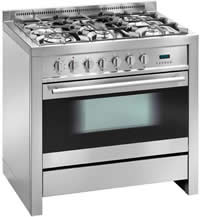 Gas ovens run on natural gas, propane, butane, liquefied petroleum gas or other flammable gas as a fuel source. It uses the gas to produce flames in order to cook or bake. A gas stove was shown at the1851 World Fair in London, but only in the 1880s did this technology gain popularity. The reason for the delay was attributed to the slow growth of the gas pipe network. Gas oven burners have two types of ignitions, standing pilot and an electric. A standing pilot requires a constant running flame underneath the stove top attached to the burners, while an electric uses sparks to ignite a flame.

Electric ovens are much a cheaper option, while gas stoves are bit more expensive compared to electric stoves when it comes to installation, as additional gas pipes also need to be installed for people buying a gas oven for the first time. However, in the long run natural gas is much cheaper compared to electric oven. Gas ovens are much faster to heat up and cool down, as it does not have to wait for electricity to heat up the coils and then wait for it to cool down. Since fans cannot be installed within the oven, heat is harder to circulate, making heat in the oven uneven. Heat in a gas oven is primarily supplied from the top of the oven. Gas ovens also need professional installation, while electric heaters can be installed by the purchaser. Gas ovens are also much harder to repair and may become costly to maintain. A major benefit of a gas oven is that since it does not depend on electricity, it can also be used during a power out.

In a nutshell, purchasing either a gas oven or an electric oven depends on various factors such as how much a person will cook, budget, maintenance, preference, baking techniques, power outages in the area, etc. A person who may be looking for the benefits of both, can also purchase a dual oven, which has comes with the benefits of an electric oven and a gas cook top.