Difference between Emoji and Emoticon

Key Difference: The primary difference between an emoji and an emoticon is the fact that while an emoticon is created out of text, primarily via the use of punctuation marks, whereas an emoji is a small image, a pictograph. 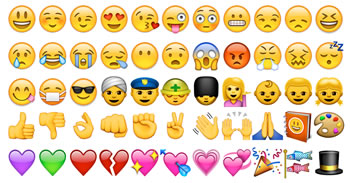 Nearly everyone has used an emoji and emoticon at least once in their lives, even if they didn’t know what it was called. In common parlance, the terms are used interchangeably, though that is incorrect. There is a clear difference between the two, even if most people either don’t know or don’t care.

An emoji is intended to be a graphical representation of a human face. In fact the term itself means pictograph, and is derived from Japanese, originally meaning e (絵, "picture") + moji (文字, "character").

Most people incorrectly refer to emojis as smileys, however it should be noted that a smiley specifically refers a stylized representation of a smiling humanoid face that is typically yellow in color. An emoji, on the other hand, can represent various expressions; in fact, they are not even limited to human faces. Practically anything can be an emoji, including but not limited to facial expressions, common objects, places and types of weather, and animals. Some modern emojis also include words or numbers that are stylistically written.

Emojis were originally developed in Japan and became popularly used on Web pages or in instant messages. The idea behind them was that they were an easier and quicker way to express an idea than using words. The emoji were eventually adapted for use by phones and became even more popular as they used fewer characters to send an emoji than to use words, and more characters meant using more text messages, which comes out to be more expensive.

An emoticon is something different. It is a portmanteau of the phrase “emotion icon”. Hence it can be described as an icon that expresses an emotion. It is intended to be a pictorial representation of a human face which can be modified in various ways to express the emotion that the user wants to express. For example, :) for smile, or :o for shock or surprise.

Comparison between Emoji and Emoticon: