Difference between Eyeliner and Mascara

Key Difference: Eyeliner is a substance that is applied on the eyelids and under the eyes to create a variety of aesthetic illusions. Mascara is used on the eyelashes to give them a fuller look.

Eyeliner and mascara are often heard when talking about makeup and now are considered as the basics of makeup. They are now a must have for every woman in her makeup kit. Both of these are often confusing when starting to use make as both are applied on areas near the eyes. However, they are two different products and are used for two different purposes. 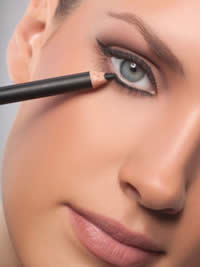 Eyeliner is a substance that is applied on the eyelids and under the eyes to create a variety of aesthetic illusions. It can also be used to accentuate the eyes and make the eyes more prominent. This is used by both men as well as women in many cultures. Eyeliners are available in liquid form, cake form, powder pressed, gel and pencil form. The origin of eyeliner can be dated back to Ancient Middle East and Mesopotamia, where a dark black line was worn around the eyes to keep the wearer from the evil eye. Though initially they produced by lead, copper ore and antimony, they are created from more friendly products these days.

Eyeliner has become a popular among today’s culture, where heavy dark eyeliners are associated with punk and goth fashion. The purpose of an eyeliner to shape the eye according to the wearer, it can be used to make the eye seem smaller or bigger or to even make it more prominent. Eyeliners are available in various colors including vibrant colors such as teal, neon green, orange, etc. They can also be frosty, pastel, gold, silver or even sparkled flecked colors. The eyeliner is applied on the eyelid, a line that blends in with the eyelashes. It can also be applied underneath the eye on the lower lid.

On the other hand, mascara is used on the eyelashes to give them a fuller look. Mascara is also used to accentuate and enhance the eyes. It is used to lengthen, thicken and define the eyelashes. The word ‘mascara’ is believed to be derived from the Spanish word ‘máscara’ meaning “mask” or “stain” and the Italian word ‘maschera’ meaning “mask.” Mascara has also be dated back to Ancient Egypt, where records around 4000 BC refer to a substance known as  kohl that was used to darken eyelashes, eyes and eyebrows.  Kohl was used to protect the wearer from evil eye.

The development of the modern mascara is credited to a scientist named Eugene Rimmel, who developed a dark substance using the newly invented petroleum jelly. The name Rimmel still translates into mascara in many languages including Italian, Portuguese, Spanish, Greek, Turkish, Romanian, and Persian. Mascara is sold in semi-liquid form in a tube with a rounded brush that is used to apply the mascara to the eyelashes. The mascara should be run through the length of the eyelash and should separate the eyelashes. It accentuates the eyelashes and gives them a longer and thicker look which directly accentuates the eyes.

Mascara and eyeliner are often used together in order to make the eyes more prominent. Various different techniques have been developed that allow users to create various different looks using these two products.