Difference between FIFO and LIFO 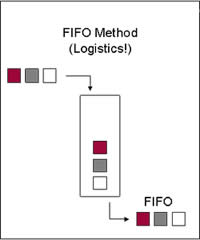 First In, First Out (FIFO) is a term that refers to use whatever was added first. For example, let’s assume that a stack of trays is being set on the floor. The older trays are stacked on the bottom while the newer trays are stacked on the top. Now, when we work using FIFO, the last tray which arrived first would be used first. The trays will be used in the same way the trays were stacked. FIFO is used in computing as well as accounting.

In computing, FIFO is an operating system algorithm which gives every process CPU time in the order they come. It follows by the first order that was given to the last order that was given by the user. FIFO is also the manner in which the computing system processes files and folder, in the order they come. FIFOs are also used in electronic circuits for buffering and flow control.

In accounting, FIFO is used to as a measure to determine the value of unsold inventory, the cost of goods sold and other transactions. In FIFO, goods that are unsold are the one ones that are most recently added to the inventory. In simpler terms, FIFO states the goods that were purchased first were sold first, after which the sold items were replaced by new goods that were recently added to the inventory. FIFO is an important inventory method used in FMCGs (Fast Moving Consumer Goods) such as restaurants. FIFO is a mandatory method as food can spoil quickly and requires being disposed off as quickly as it is purchased.

Last In, First Out (LIFO) is a term that is used to refer to whatever was added last is used first. Using the tray example; the trays are stacked in order of the oldest one at the end and the newest one at the top. Now, newer trays are added to the top and they are used in the same way. The newer trays are used first, with the older trays being used last. Similar to FIFO, LIFO is also used in accounting and computing.

In computing, LIFO is a queuing theory that refers to the way items are stored in types of data structures. If set according to LIFO structured linear tray, items can only be taken off from the top; which means the data that was added last to the tray is the first one that will be taken out. This term refers to the abstract principles of list processing and temporary storage, particularly when there is a need to access the data in limited amounts, and in a certain order.

In accounting, LIFO is also used as a measure to determine the value of unsold inventory. According to this, the goods produced the most recently are recorded as sold first, with the goods that were produced previously are still in the inventory or sold last. LIFO states that an entity uses or disposes of its newest inventory first. If the asset is sold less than what it is acquired for it is considered as a loss, while the opposite is considered as a profit. LIFO was commonly used method for tax evaluation as it increases tax liability. However, International Financial Reporting Standards (IFRS) has banned this method of reporting and only allows FIFO. This method is still used in the US.