Difference between Flammable and Inflammable

Key Difference: Flammable and Inflammable have the same meaning. They both refer to products that can easily catch fire. The inflammable is derived from the Italian preposition ‘en’ from ‘enflame’, causing the confusion. 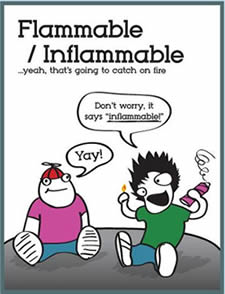 So, using this example, it should mean that ‘inflammable’ means it doesn’t have the ability to catch fire. However, the term ‘inflammable’ was originally derived from the Latin preposition meaning ‘en’ from ‘enflamed’. Hence, inflammable was used to refer to something that could catch fire. But because of the massive confusion, in the 1920s, the National Fire Protection Association started urging people to shift from ‘inflammable’ to ‘flammable’ to make it less confusing. This gave birth to the two different words.