Difference between Fruits and Nuts

Key Difference: Fruits are soft skinned, sweet-tasting products that have tiny seeds in it. A nut is a composite of a fruit and a seed. It is a dry fruit that has one or two seeds that are fused with the hardened ovary wall.

Botanically, fruits and nuts have a very similar definition and because of this these two are often used interchangeably. However, these two differ from each other in a few distinct ways. Fruits are actually the mature ovary of any flower or a plant that contains seeds, while nuts are a composite of a fruit and a nut. The hard outer layer of a nut is scientifically considered as a fruit, even though we do not consume it.

A fruit is derived from the mature ovaries of a flowering plant, in some cases it could also be derived from accessory tissues. The plants spread their seeds through fruits, which then go on to produce more plants. Most of the plants bear edible fruit that has a soft, smooth skin and is juicy on the inside. Fruits play an active part in human and animal diet and are a huge source of nutrition. Many humans also depend on fruit as a food source, eating nothing but fruit. Botanically, many vegetables as well as cereal grains can be classified under fruit, though according to the culinary definition, these are grouped separately. According to botany, ‘fruits are the ripened ovaries or carpels of a plant that contain the seeds.’ 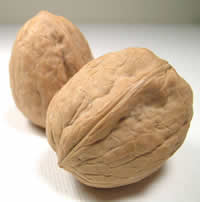 Nuts are a composite of a fruit and a seed. Botanically, the hard shell of a nut is actually the fruit, while the inner layer we can consume is the seed. Though in a culinary context, a number of dried seeds can be referred to as nuts, only the ones that include the indehiscent fruit are considered as true nuts in a botany context. Indehiscent means that they do not open at maturity. A nut is defined as ‘a simple dry fruit with one seed (rarely two) in which the ovary wall becomes very hard (stony or woody) at maturity, and where the seed remains attached or fused with the ovary wall.’

Many people also end up confusing nuts with legumes such as peanuts, almonds, coconuts, however these are not considered as a nut, botanically. Nuts are usually associated with a hard and smooth outershell that one has to break in order to have better access to the seed. The seed is the part that is often edible and used in human and animal diet. The seeds can be consumed raw, can be roasted or added as additional flavoring to other foods. A nut also does not have any juice, but can exude oil. The kernel or shell is used to produce objects such as fiber, etc. Similar to fruits, nuts can also over good benefits and are a healthy addition to the diet.