Difference between Gene and Genome

Key difference: Gene is a unit of heredity which is composed of DNA occupying a fixed position on a chromosome. Genome is defined as a group of all genes comprising of a haploid set of chromosomes.

With so many different species present around the world, each species have a unique set of inherited characteristics which make them different from one another. These characteristic are encoded in the DNA molecules present in the cells. Gene and Genome are both associated with DNA and are defined using the same molecules. DNA is the basic unit of heredity which is mainly found on chromosomes within the nucleus of the cells of an organism. 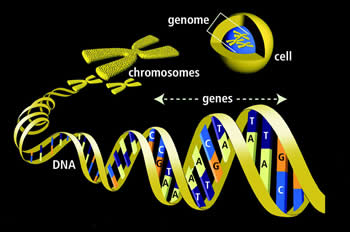 A gene is a molecular unit of heredity on a living organism. Living beings depend on genes, as they identify all proteins and functional RNA chains. Genes hold the information to build and maintain an organism's cells and pass genetic traits to the offspring. It means that genes are heredity elements which determine the inherited genes that are transmitted from the parent to their offspring in reproduction. Genes are associated with the DNA molecules. DNA is the main genetic material found in all living organisms. Genes are composed of specific DNA portions or segments. These specific segments are capable of controlling specific heredity characteristics. This is usually done by DNA transcription and DNA translation processes. During reproduction, the offspring obtains one gene of each type from both parents. These different forms of genes are known as alleles. A single allele or multiple alleles are responsible for controlling certain characteristics or features of an organism.

In molecular biology and genetics, the genome is the entirety of an organism's hereditary information. They are encoded in DNA molecules. The total DNA content in a single cell is known as the ‘genome’ of the organism, but some organisms have only RNA so that their genome is the total quantity of RNA content. It basically includes both the concepts of DNA and RNA. The total content of the nuclear in a DNA cell is called as ‘nuclear genome’ and the total DNA content in mitochondria is called as ‘mitochondrial genome’. In addition, genome may also comprise of non-chromosomal genetic elements such as viruses, plasmids and transposable elements. 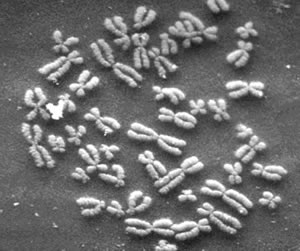 This study of genome characteristics related to organisms is called as genomics. The evolution of genomes can be studied and identified by its composition, which includes size, proportion, repetitive and non-repetitive DNA. If we consider the human genome, it contains 23 chromosomes, and of 23, only one chromosome is a sex determinative, while the remaining 22 chromosomes are autosomal chromosomes. There are approximately 20,000 to 25,000 genes of the human genome. In order to identify and map the sequence of chemical base pairs which make up the human DNA, there is an international project going on since 1990 called ‘The Human Genome Project’.

Comparison between Gene and Genome: