Difference Between Glasses and Contacts

Key Difference: Glasses also known as spectacles, specs or eyeglasses are frames that bear lenses and are worn in front of the eyes for correcting vision. On the other hand, contact lenses are lenses that are directly placed on the cornea of eyes.

Glasses and Contact Lenses are different types of prescribed eye wear. A person who has vision defects such as nearsightedness, farsightedness, and astigmatism can use these to help correct their vision. Choosing between glasses and contacts depends on a person’s point of view and comfort, but a person should keep in mind that they are both temporary forms of correction methods, while a more permanent method would be Lasik or corrective surgery.

Glasses also known as spectacles, specs or eyeglasses are frames that bear lenses and are worn in front of the eyes for correcting vision. Other types of glasses are known as sunglasses and safety glasses are used to protect the eyes from sun, debris, UV rays, dust, etc. Glasses usually have a nose pad to support the glasses on the bridge of the nose and keep it from slipping and temple arms that are placed over the ears to keep the glasses upright on the face.

The earliest forms of using glass for magnification purposes has been dated back to ancient Egyptian times in the 5th century B.C. However, according to reports the first eyeglass was developed in Italy in 1286 A.D. by Dominican friar Giordano da Pisa. These early spectacles, in the 13th and 14th century, had convex lenses that could correct both hyperopia (farsightedness), and the presbyopia, which develops as a person ages.

Other types of glasses include safety glasses, (snow goggles, sunglasses) 3D glasses, ready-made reading glasses, bifocals and bioptics.  Sunglasses usually have a tinted lens to protect the eyes against sunlight and UV rays; it is available with or without corrective lens. Snow goggles and water goggles are usually available without prescribed lens and are used to keep the snow or water out of the eyes. 3D glasses are used to give the illusion of three dimensions on a two dimensional object. Ready-made reading glasses are available over the counter and in a strengths ranging from 1.00 to 3.50. Bifocals are used to correct nearsightedness and farsightedness.

On the other hand, contact lenses are lenses that are directly placed on the cornea of eyes. Contacts can also be used for cosmetic or therapeutic reasons. Originally, Leonardo Da Vinci is credited with the idea of the contacts in 1508, but the first successful contacts were developed by German ophthalmologist, Adolf Gaston Eugen Fick in 1887. These lenses were developed 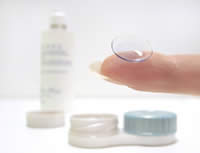 using heavy blown glass and was 18-21mm in diameter and the empty space between cornea and the lens was filled with dextrose (glucose) solution. Originally lenses were scleral lenses, which meant that they covered the sclera and created a tear-filled vault over the cornea. The lenses were made of full blown glass until the 1930s when PMMA or Plexiglas lens allowed production of plastic lens.

The first “corneal” lenses were developed in 1949 and were much small compared to the sclera lens. The PMMA lenses were pretty expensive and fragile and were known as hard lens. A drawback of hard lens was that it was not breathable, meaning it did not allow oxygen to be transmitted through the lens to the cornea. The constant development for more comfortable and breathable lens has resulted in today’s soft lenses.

The different types of lenses includes corrective, X-Chrom, cosmetic, and therapeutic. Corrective lens are available in clear or color. These lenses are usually prescribed and are used correct vision problems such as farsightedness, nearsightedness and astigmatism. X-Chrom lens are used by people with color blindness, though it does not restore normal color vision, it helps distinguish colors better. Cosmetic lens are usually colored lens that allows a person to temporarily change their cornea’s color and may also include corrective measures. Therapeutic lens are soft lenses that are used to treat and manage non-refractive disorders of the eye. A bandage contact lens protects a person’s injured or damaged eye from constant rubbing and blinking.

Lenses are disposable, but the time frame depends on the development of the lens. The dispose schedule ranges from daily, weekly, monthly to yearly. Glasses on the other hand do not need to be constantly replaced, but will have to be changed if a person’s prescription changes. Glasses are also inconvenient during vigorous sports and in constant cold temperatures. However, contacts need more care compared to glasses as they are directly placed on the eye, and has more chances of infecting.