Difference between Globalization and Capitalism

Key Difference: Globalization is the process of international integration, where in the world is getting closer and more ideas, view, products, thoughts and culture are getting exchanged. Capitalism is an economic system that is based on private ownership in terms of production and the creation of goods or services for profit.

With an increase in technological advancements, the world is getting smaller and smaller and people are getting closer and closer. This has contributed to terms such as ‘globalization’ and ‘capitalism’. Though, these two words go hand-in-hand, they are different from each other in many ways. 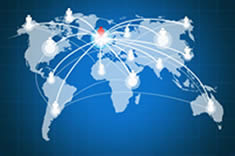 Globalization is the process of international integration, where in the world is getting closer and more ideas, view, products, thoughts and culture are getting exchanged. A best example of this is the migration of people from one place to other places. The United States has been known as a melting pot from the beginning, owing to the many different types of cultures that reside in that country. Globalization has been contributed to advances in transportation and telecommunications infrastructure, including the rise of the Internet.

Merriam Webster defines ‘globalization’ as, “the act or process of globalizing : the state of being globalized; especially : the development of an increasingly integrated global economy marked especially by free trade, free flow of capital, and the tapping of cheaper foreign labor markets.” This is the more general term, however in relation to capitalism it is used more in a sense to define the economy. Economist Takis Fotopoulos describes ‘economic globalization’ as the opening and deregulation of commodity, capital and labor markets that led toward present neoliberal globalization.

In 2000, the International Monetary Fund (IMF) defined four basic aspects of globalization: trade and transactions, capital and investment movements, migration and movement of people and the dissemination of knowledge. In an economic sense, the term globalization means to make trade free among different countries, including removing tariffs and allowing free flow of capital, goods, labor and services. Economists describe globalization as the grouping of national economies into one large international economy via foreign direct investment, migration, trade, capital flows, and trade. However, critics of this term suggest that if globalization is given free rein, there will be an increase in misuse of natural resources and labor.

Capitalism is an economic system that is based on private ownership in terms of production and the creation of goods or services for profit. Capitalism has played a huge part in the economy after the death of feudalism. The term ‘capitalism’ is defined as, “an economic system characterized by private or corporate ownership of capital goods, by investments that are determined by private decision, and by prices, production, and the distribution of goods that are determined mainly by competition in a free market.”

According to experts, Great Britain and the United States, prior to the Industrial Revolution were known as true capitalist economies. They used to create their own rules and laws regarding labor, production, and other factors. Industrialization gave rise to sweatshops, social protest and resulted having the government to intervene to form labor and production laws. It is believed that in pure capitalism, there is no place for child labor laws, anti-discriminatory hiring practices, minimum wages, labor laws, and Social Security.

Capitalism has been divided into a cycle with different factors: owner class, working class, rational calculation for profit, consumers, and standard of living. The owner class is the people who have the capital for purchasing machinery and hiring people to produce goods for them. The working class is the class that works for the working class in order to produce to the goods. They have no ownership of the goods and are paid wages by the owner class. The owners judge the market and the product and then set a profit margin that could earn them the most profit. The consumers are the people who purchase the products, which can also include the working class. The more profit the owner receives, the more goods they produce, the lower the cost of goods and higher affordability, thus increasing the standard of living.

Popular belief states that removing restrictions on trade will give a boost to privately-owned corporations to flourish. While, many people are promoting the idea of free trade and privately owned companies, the others argue against it stating that it will cause the companies to claim monopoly and use natural resources and raw materials without regard.