Difference Between Glucose and Cellulose

Key Difference: The term “glucose” is derived from the Greek, “glukus”, meaning “sweet”. Glucose is also known as D-glucose, dextrose, or grape sugar is found in plants and it is a byproduct of photosynthesis and fuels for cellular respiration. Glucose is used as energy by living organisms. On the other hand, cellulose is a polysaccharide that is produced by bonding glucose units together. Cellulose is most commonly found in the cell walls of green plants and algae. Cellulose is used a dietary fiber for humans.

Glucose and Cellulose are present in plants and are both types of carbohydrates, but differ from each other. Carbohydrates are the most abundant organic material on the Earth and are used as a source of energy for living organisms. They can be characterized into three different types; monosaccharide, disaccharides and polysaccharides. While Glucose is a monosaccharide, cellulose is polysaccharide. 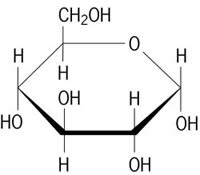 The term “glucose” is derived from the Greek, “glukus”, meaning “sweet”. The suffix ‘-ose’ denotes that it is a sugar. Glucose is also known as D-glucose, dextrose, or grape sugar is found in plants and it is a byproduct of photosynthesis and fuels for cellular respiration. Photosynthesis is the process where the plants produce their own food using carbon dioxide, water and sunlight. It is a dietary carbohydrate that is directly absorbed in the bloodstream during digestion. In living organisms such as humans, plants and animals, glucose is used as a body fuel and energy. Excess glucose is stored in the form of glycogen in animals and humans and in the form of starch in plants.

Though glucose is most commonly found in the form of food, it can also be found in the form of tablets, powder or liquid. Glucose in the form of dextrose is given to a person who suffers from a condition known as diabetes. Diabetes is a disease where a human’s body stops processing insulin which converts glucose into energy. In industry, glucose is used as a precursor to make vitamin C, citric acid, gluconic acid, bio-ethanol, polylactic acid and sorbitol.

On the other hand, cellulose is a polysaccharide that is produced from glucose. The term “cellulose” is derived from the Latin “cellula” which means “biological cell.” Glucose units are bonded together by β(1→4) glycosidic bonds. The molecules are joined by hydrogen bonds which form very rigid fibers, keeping the bonds together. Cellulose is most commonly found in the cell walls of green plants and algae. It is also the most common carbohydrate on the Earth. There are two forms of cellulose, hemicellulose and lignin. Similar to other polysaccharides, cellulose is insoluble in water.

Cellulose is an organic compound and has the formula, (C6H10O5)n. It has a linear chain of several hundred to over ten thousand β(1→4) linked D-glucose units. About 33% of all plant matter is cellulose. Cellulose is tasteless, odorless, is hydrophilic with the contact angle of 20–30, is insoluble in water and most organic solvents, is chiral and is biodegradable. It can be broken down chemically into glucose by being treated with concentrated acids at high temperature.

Cellulose is used for dietary reasons in humans and more commonly in industrial uses. In humans, cellulose provides fiber for the body, though human cannot completely break down cellulose. It helps in digestion and acts as a bulking agent in feces. It is an important part of a human’s diet. Industrially, cellulose today is mainly obtained from wood pulp and cotton. It can also be derived from by harvesting plant fibers like cotton, flax, hemp, and jute and processing into cloths. Cellulose is used to produce paperboard and paper card stock and of textiles made from cotton, linen, and other plant fibers. It can also be converted into cellophane and rayon for use in textile industry. It also plays an important part in producing alternate, environmental-friendly fuel.