Difference between Goldfish and Koi

Both goldfish and koi are popular ornamental fishes belonging to the Cyprinidae Family. These fishes have more similarities than differences. In fact, they are so closely related that they are able to breed with each other, though their offspring will be sterile. Often, immature koi and goldfish are mistaken for each other, however, there are differences between koi and goldfish. 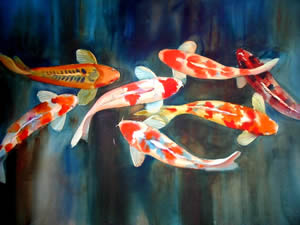 Koi is an ornamental variety of common carp, Cyprinus carpio. They are a selective bred, and were first bred in Japan in the 1820’s.

Koi have stout and elongated bodies, and their fins are short but full of colours. They have distinctive and colourful body patches which makes the fish very attractive. Usually, the koi fishes prefer outdoor ponds or water gardens. They have a range of colours including white, black, red, yellow, blue, and cream. The Koi fishes have two small whisker-like sensory organs hanging in their mouth, which is known as barbels. They generally grow to be around 24 inches in length, however some koi have been known to reach over a meter. They are also very long-lived; when in a well-kept outdoor pond they live up-to 100 years. The oldest koi on record lived 226 years.

Koi are bred for their patterns, colors, and scales. There are new varieties of koi being developed. 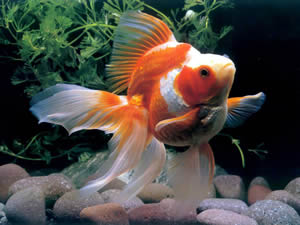 Goldfish is a domesticated ornamental freshwater fish species. They belong to the ‘Carassius Auratus’ family. There are many varieties of goldfish, which are developed through selective breeding, done by humans. The first recorded selective breeding of goldfish took place in China during the Jin Dynasty (265-420AD).

Goldfish are very popular because of their small size, affordability, and colorful look. Generally, goldfish have flowing tails and fins and a slightly pudgy body; some have puffy ‘cheeks,’ or lumps on the tops of their heads. In contrast to many fish species, goldfish are intelligent and they easily respond to external signals; they are gregarious fishes, who love to be social, and are extremely active except during winter. The common goldfish is shiny orange in color and a small-bodied fishes, which can be easily kept in tanks. However, goldfish produces a large amount of waste from their faces and through the gills. Therefore, frequent cleaning of the tank is required before it gets toxic for the fish.

Comparison between Goldfish and Koi: