Key Difference: As compared to normal glass, Gorilla Glass is highly scratch resistant. It is also harder, while also being much thinner than the typical glass. It is also less likely to damage, break or shatter. 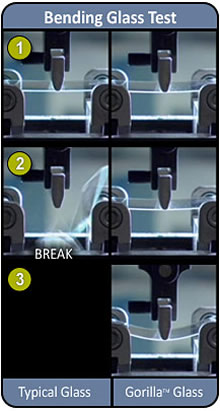 One of the most common problems that smartphone users see is the scratched and broken glass. Every time that phone slips through the fingers and falls smack on the floor screen down, the user will hold their breath and while praying to their God hesitantly pick the phone off of the ground and check if the fall shattered the screen.

Due to the large number of shattered screens on smartphones, users keep urging manufacturers to develop screens that are resistant to damage and scratches. This is where Gorilla Glass comes in.

Gorilla Glass is a type of toughened glass created by Corning Inc. Glass is an amorphous solid material that is usually see through. It is created out the chemical compound silica, which is found in abundance in sand. The process of creating a toughened glass includes treating a sheet of glass with chemical baths in high temperatures. This increases the compressive residual stress of the glass which means that the glass is less likely to scratch or damage. Gorilla Glass is created by submerging the glass in a molten alkaline salt bath using ion exchange.

Normal Glass is quite prone to scratches, and more importantly to breakage. As compared to normal glass, Gorilla Glass is highly scratch resistant. It is also harder, while also being much thinner than the typical glass. It is also less likely to damage, break or shatter. Hence, Gorilla Glass is preferred to be used as the top covering on the display screen of electronics such as smartphones, DVD players, mobile gaming consoles, MP3 players, etc.

While the creation and usage of glass has been around for centuries, Gorilla Glass was started developing in 2005. It is essentially a modified type of Corning "Chemcor" glass which was created in 1960. The "Chemcor" glass was a type of strengthened glass that was used until the early 1990s in various commercial and industrial applications, which included automotive, aviation and pharmaceutical uses. 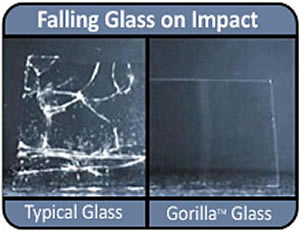 Corning was asked to develop a type of toughened glass thin enough which could be used in consumer electronics, such as its new iPhone. Gorilla Glass was officially launched in 2007 and by 2010, about 20 percent of mobile handsets worldwide were using Gorilla Glass. This amounted to approximately 200 million units.