Difference between Gull and Albatross

Key Difference: Gulls belong to the Laridae Family of the Animalia Kingdom. They are associated with having heavy bodies, long wings, moderately long necks and long legs with full webbed feet. Albatrosses are one of the largest flying birds that exist today. They belong to the Procellariiformes Order and the Diomedeidae Family. Albatrosses are known for their large wing-span and their ability to soar flawlessly.  The Albatross are highly efficient fliers and do not require to constantly flap their wings to stay afloat.

Many people confuse gulls and albatross due to their resemblance in appearance. However, these two are completely different creatures.

Scientifically the term ‘seagulls’ is actually an informal name for the scientifically correct name, ‘gulls’, as many gulls also reside on land and other dry areas and do not travel to seas and oceans for long periods of time. Gulls belong to the Laridae Family of the Animalia Kingdom. Until recently, most of the gull species were placed in the Larus genus, but it is now considered to be polyphyletic, or too different from the original ancestors. This led to classifying them into several different genera. Gulls are found in almost all habitats including the Arctic as well as the Antarctic. However, they are less common on tropical oceans.

Almost all species of gulls have been characterized with a uniform shape. They are associated with having heavy bodies, long wings, moderately long necks and long legs with full webbed feet. They have a heavy bill that is slightly hooked. Almost all of the species have rounded tails except for three that have forked tails. The most common type of gull that is found is known as the Herring Gull. The sizes of gulls vary depending on the species. The smallest gull is about 29 cm (11.5 inches), while the largest gull is approximately 76 cm (30 inches). Their weights range between 120 g (4.2 oz) and 1.75 kg (3.8 lbs). Gulls are known for their aggressive behavior and are known to attack quickly if they feel threatened. Gulls are also very territorial creatures and defend their territories from other males and intruders using high vocal calls as well as aerial attacks. Many species have also been known to show intelligence and has exhibited using tool behavior, such as using pieces of bread as bait to catch fish. They are also well-known for their mobbing behavior, where they annoy and harass predators and other creatures to get what they want.

Gulls are colonial and monogamous breeders. They also exhibit site fidelity by returning to the same site after breeding there once. Males and females often mate in the same colony. Most gulls breed once a year with the breeding season lasting from three to five months. One clutch includes approximately one to three eggs depending on the size and species of the bird. The females often try and synchronize their laying in one colony. Incubation period lasts 20-26 days and the parents are protective of their young until the nestling can fledge.

Gulls are kleptoparasites that feed on a diet of fish, insects, earthworms, rodents, eggs, carrion, offal, reptiles, amphibians, seeds, fruit, human refuse, and even other birds and fishes. Kleptoparasites are animals that rely on other animals or creatures to get their food. Gulls usually require other birds, humans or creatures and then steal the food from them. Gulls can also survive on salt water for many days due to a gland that secretes the salt out of the water. This is helpful when they wish to survive on the sea or ocean for many days. Gulls also feed on live animals such as whales, orcas and kelp gulls. Gulls have been proven positive for the ecosystem as they have been useful in waste management. Gulls have been known to reduce or forage on organic waste that has been left behind by humans. 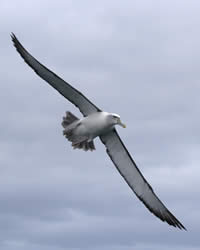 Albatrosses are one of the largest flying birds that exist today. They belong to the Procellariiformes Order and the Diomedeidae Family. They are often divided into four great genera including the great albatrosses (Diomedea), the mollymawks (Thalassarche), the North Pacific albatrosses (Phoebastria), and the sooty albatrosses or sooties (Phoebetria). The number of different albatross species has been under constant debate and the current accepted number of species is 21. Albatrosses are known for their large wing-span and their ability to soar flawlessly.  The Albatross are highly efficient fliers and do not require to constantly flap their wings to stay afloat. They can travel great number of distances without even flapping once. The sizes of albatrosses vary depending on the species. They can range from 0.9m - 1.3m (35 in – 51 in). They have a wingspan of 2m - 3.4m (78 in – 134 in). Their weight can range between 8kg - 10kg (17lbs – 22lbs).

The albatrosses are associated with having strong and large bills, with the upper mandible that turns into a hook. The bill has sharp blades on either side for handling prey. They have a large and heavy body and long legs that also allow them to walk effectively on land. They have no hind toe and the rest of feet are completely webbed. They have strong and long legs. They are also able to fly almost 1000km without flapping its wings. They also have the ability to dive under water to acquire prey. The diet of an albatross includes cephalopods, fish, crustaceans, offal, carrion and feed on other zooplankton. The Albatross are also able to drink salt water and has special glands in its nose that allows it to secrete the salt from the water. Albatrosses are more commonly found in the Southern Hemisphere from Antarctica to Australia, South Africa and South America. There are also four species that exist in the Northern Hemisphere of which three species are found in the North Pacific, from Hawaii to Japan, California and Alaska; and one, the Waved Albatross, breeds in the Galapagos Islands and feeds off the coast of South America. They are extinct in the North Atlantic.

Albatrosses have a special mating process that is different from almost all of the other flying birds. Albatrosses require long amounts of time to find the perfect mate and rear a chick with that mate. They consider it to be a huge investment. Albatrosses are colonial and usually nest on isolated islands. They are also philopatric and return to their natal colony to breed. The young often perform breeding dances and ‘rituals’ such as preening, pointing, calling, bill clacking, staring, and looking up to the sky. They often go back to their colonies to learn the proper etiquette of the dance from the older males and females in the colony. Then they travel to other nesting grounds and perform the dance. It takes a number of years for the perfect mate to be chosen with whom they then create a pair-bond that lasts for their life. The male and female bond also creates a unique individual language that is different from the others.

The albatross also take a while in order to start producing a young chick. Each clutch includes only one egg. The great albatrosses (like the Wandering Albatross) take over a year to raise a chick from laying to fledging. The egg is then incubated by both parents, which lasts around 70 to 80 days. The chick is guarded and fed until it has the ability to thermoregulate itself. The chick takes time to fledge, which can take up from anywhere to 140 days to 280 days. The Albatross numbers have been dwindling due to human activities such as long-line fishing, hunting and ocean/sea contamination. The albatross get caught in the line-fishing by getting hooked to the bait and can drown. The albatross were also hunted for their features that were used to stuff pillows and comforters. Conservationists are working with fisherman and governments to find a solution to eliminate the threats faced by the albatrosses.