Difference between Hoodoo and Voodoo

Key Difference: Hoodoo is a set of magical practices, while Voodoo is a form of established religion. Hoodoo was developed to allow people to use supernatural forces in order to improve or better their daily lives. Voodoo is a more established, structured religion that is followed in Haiti and places heavily populated by Haitians.

Hoodoo and Voodoo have gained popularity due to widespread cultural references. These words many sound the same or even similar, but these two cultures are different from each other. Hoodoo and Voodoo, both have roots in African culture. 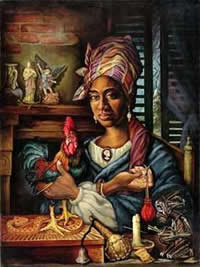 Hoodoo is a type of African traditional folk magic that has developed as a fusion of different types of cultures and magical traditions. Hoodoo is considered as a mix of African folkloric practices with American Indian botanical knowledge and European folklore. It is also associated with conjuration, conjure, witchcraft, or rootwork. Hoodoo lacks a foundation and has no set beliefs or proper foundation, the rituals all vary depending on the performer. The term ‘hoodoo’ is used as a noun to describe the practice as well as its practitioners and can also used as an adjective and a verb. Hoodoo incorporates European magical practices known as grimoires, along with incorporating biblical creatures. Hoodoo was brought to the United States by the migrating of African slaves and is more popular in South America.

Hoodoo was developed to allow people to use supernatural forces in order to improve or better their daily lives. They could use these forces and change their lucks, love lives, social lives, etc. It could also be used negatively to harm, curse or seek revenge from people that affect the people’s lives. Magical rituals included using instruments such as herbs, parts of animals' bodies, minerals, possessions, and bodily fluids such as urine, menstrual blood, and semen. Conjuring departed loved ones was also a major aspect of hoodoo, it would allow the people to see and talk to their dead families. In modern times, hoodoo artifacts such as herbs, floor washes, minerals, sachet powders, candles, incense, oils, crystals, etc. are sold commercially. Hoodoo also includes ‘voodoo dolls’, which is seen dominantly used in Louisiana Voodoo practices. These dolls are used to place curses on particular people.

Voodoo is an established religion that is dominantly a part of the Haitian culture. It was brought to the US by the migration of Haitians to Louisiana during the Haiti Revolution. Voodoo is a more established, structured religion that is followed in Haiti and places heavily populated by Haitians. Practitioners are called "vodouists" meaning, “servants of the spirits.” The followers believe in a god called Bondyè, who is an almighty and distant God. However, Bondyè does not directly involve himself in the lives of humans; hence the voduists worship him indirectly by worshiping the spirits that serve Bondyè. In addition to worshiping Bondyè and his spirits, Voodoo also includes offerings, creating devotional alters, ceremonies, musical events, dances and spirit possession. Suzanne Preston Blier in her book states that the word “Vodou” is derived from the Haitian Creole word ‘Ayizo’, meaning "mysterious forces or powers that govern the world and the lives of those who reside within it, but also a range of artistic forms that function in conjunction with these vodun energies."

Another form of ‘Voodoo’ is the one that was developed in Louisiana, known as Louisiana Voodoo or New Orleans Voodoo. It is a set of religious practices that have originated from African traditions. It became popular during the African slave trade and is rooted in West African Dahomeyan Vodun. The African captives were brought over from Benin, West Africa and along with them the captives brought over their customs, culture and religion. The herbs, poisons, rituals and charms are believed to protect them and harm their enemies. Louisiana Voodoo places an emphasis on Gris-gris, voodoo queens, use of Hoodoo occult paraphernalia, and Li Grand Zombi (snake deity). Gris-gris is an amulet that is worn around the neck on a black string. It is a folded cloth-like material that is inscribed with verses from the Qur'an. It is believed to bring good luck and ward off evil spirits.

In a nutshell, hoodoo focuses more on the magical aspects such as warding off evil or bringing good luck using charms and asking the forces to bend to your powers. Voodoo is a structured form of religion, which includes deities, rituals, music, culture, etc.

There is a spiritual solution for every spiritual and confused problem in life. We are the strongest spiritual home in the world. We have the indomitable spiritualists as serving priests. It is a spiritual home where people come in dead, and walk out alive. We practice spiritual obscurity, qualifying the unqualified. We restore wasted years, seized glories and spiritually shortchanged lives. We give success, breakthrough, victory, good heakth, wealth, riches and power. I remain Dr. Chukwu Innocent Ogbonnia.