Difference between Hyundai i10 and Grand i10

Key Difference: i10 and Grand i10 both are cars from Hyundai Motor Company. The Grand i10 is a successor to i10.

The Hyundai i10 is a hatchback car that was made for the city drive and was launched in October 2007. The i10 is available in five engine options; iRDE 1.1, i10 Kappa 1.2, i10 Diesel, i10 Electric and the latest Kappa-2 1.2, depending upon the markets. It has features like electric power windows, power steering, audio system, air conditioning, etc. There is a long wait for for the second generation i10 that is expected to launch in early 2014. 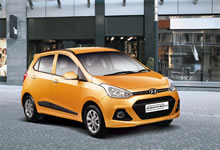 On the other hand, The Hyundai Grand i10 is also a hatchback car that has been launched in September 2013. It is a car that has a combination of the Hyundai i10 and Hyundai i20. The production of the Grand i10 is held at Chennai, India plant. It is also a city drive car specially designed for the Indian market. The Grand i10 was launced with two engine options with petrol and diesel fuel type. The engine options are 1.2 litre Kappa Dual VTVT petrol and 1.1 litre advanced 2nd generation U2 CRDi diesel engine. The car has Rear AC Vents. A new feature added to it is 1GB internal memory to store music. As per ARAI tests, the diesel engines of the Grand i10 delivers a mileage of approximately 24.0 kmpl.