Difference between Ice Cream and Kulfi

Key Difference: Ice cream and kulfi are both dairy based frozen desserts. Both differ in aspects like method of preparation, texture and taste. Kulfi is creamier and denser than ice cream. Unlike ice cream, kulfi’s preparation does not involve whipping techniques while freezing it. 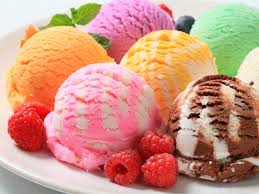 Ice cream is a frozen dairy based dessert. The invention of ice cream is associated with many different stories by different people. However, many believe that its origins are rooted back as far as 200 BC, where it is supposed to be created by people of China by mixing rice and milk together and then freezing it by packing in snow. Generally the main ingredients of an ice cream are sugar, milk and flavoring. However, most of the ice creams tend to be frozen creams.

According to Chris Clake, author of “The Science of Ice cream” - "Ice cream is basically made up of little ice crystals and air bubbles and fat droplets, all sort of glued together by a viscous sugar solution". The method of creating ice creams remains to be the same with some little differences in flavors, etc.

The ingredients like milk, sugar cream and desired flavoring are whipped around. This process works as the aeration process and is done as the ice cream is being frozen. It is whipped by a blade in a tube, which is kept chilled from the outside. A common recipe of ice cream uses ingredients like milk, sugar, eggs, flavoring and fruits. Gelato, Frozen yogurt, Frozen Custard, Sorbet, Fried Ice-cream, Softies, Ice-pop, Stone Ice-cream can be considered as the offsprings of ice creams. 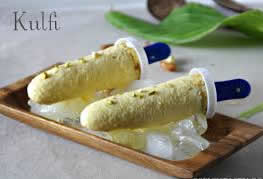 Kulfi is another desert like ice cream from South Asia. Like ice cream it is also made by ingredients like milk and sugar primarily. The main difference between ice cream and kulfi is the texture, which also brings difference in taste. Kulfi is creamier than ice cream.  Generally, it is made by reducing the volume of full cream milk nearly one third to what was its original volume. Like ice creams, it is also prepared in many flavors.

Thus, both primarily differ in the method of preparatio. Ice cream is made by whipping and aerating. However, kulfi does not include such processes. The ingredients are simply boiled and reduced in a volume. Then, the mixture is poured in molds and put to freeze.

Today, a variety of techniques are available in order to make ice creams. However, for kulfi the traditional method of boiling is preferred. Many flavors and varieties are available for consumers to choose from.

Comparison between Ice Cream and Kulfi: