Difference between Ice-cream and Sundae

Key Difference: Ice-cream is a frozen desert that is made from some form of dairy product such as milk or cream and is commonly combined with fruit or other flavors. Sundae is made of two or more scoops of ice-cream that is topped with syrup, sauce, crushed or chopped fruits, nuts and various other toppings. 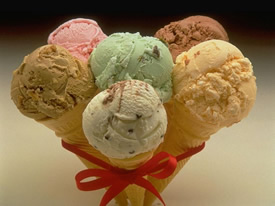 Ice-cream is a popular frozen dessert and treat around the world. It comes in many different flavors and forms; there is ice-cream, frozen yogurt, gelato, sundaes, etc. These may seem just variations of ice-cream; however, each frozen treat offers something different and special. Sundae is a frozen treat that is made using ice-cream; which is where the common confusion stems from. Let’s understand them separately to clarify the two concepts.

Ice-cream is a frozen desert that is made from some form of dairy product such as milk or cream and is commonly combined with fruit or other flavors. Ice-cream is derived from its earlier from of iced cream or cream ice. Ice-cream originates from the older traditions of pouring juice or crushed fruits over frozen ice and confused as a popular treat during the summer. Originally, frozen ice with juice, which we know refer to as snow cone, was consumed as a winter treat, but people started creating holes underground to preserve snow and big pieces of ice over months to serve it as a treat in summer. Since, this was before the invention of the refrigerator, people would have to take ice from frozen lakes during winter and store it until summer. The term ‘ice-cream’ varies based on country. Some countries use different terms such as frozen custard, frozen yogurt, sorbet and gelato are used to distinguish between different styles of ice-cream. However, in other countries, a single term is used to refer to all different types of ice-creams. For example: Italy uses ‘gelato’ to refer to ice-cream and all its variants.

It is believed that the Arabs were the first to use milk as a major ingredient of ice-cream and they sweetened the milk with sugar rather than fruit juices. Their version of ice cream was created by mixing milk or cream with yogurt and flavored with rose water, dried fruits and nuts. Ice-cream remained a expensive and rare treat until the late 19th century and early 20th century when production in massive quantities became cheaper. Ice cream is created from milk or heavy cream being mixed with sugar or corn syrup, the mixture is then added with crushed fruit or other ingredients such as nuts, chocolate, vanilla beans, etc. This mixture is then slowly frozen by multiple methods. Originally it was frozen by putting in an ice bath and adding rock salt to the water to reduce the temperature of the mixture. Now-a-days, it is put into the freezer and taken out and mixed at 30-minute intervals or placed into an ice-cream machine with ice and salt. 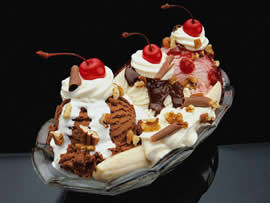 Sundae is a desert that is created from ice-cream but these days it is considered as a separate frozen treat. Sundae is made of two or more scoops of ice-cream that is topped with syrup, sauce, crushed or chopped fruits, nuts and various other toppings. The origin of the term ‘sundae’ is unknown, but it is usually considered as a variation of Sunday, the day of the week. According to popular stories about Sundae’s creation, multiple stories suggest that the sundae was created as a way to counter the blue laws issued that stated it was prohibited to sell ice-cream and ice-cream soda. These laws resulted in producing Sunday substitutes to sell on that particular day.

According to the laws, ice cream that is mixed with a topping that obscures the main product is not considered as ice-cream. The birthplace of sundaes are also in dispute with many states stating that sundaes were invented in their state. However, according to documentation published by the Evanston Public Library in Illinois, the state had issued a law that prohibited consumption of soda or ice cream on Sundays. Ice-cream sundae or sundae is made using ice-cream as a main ingredient and adding different toppings to it such as sprinkles, fruits (chopped or crushed), nuts, syrups, whipped cream and maraschino cherries, etc. There are popular types of sundaes such as: Classic ice cream sundae, Fresh fruit sundaes, Hot fudge sundae, double fudge sundae, caramel sundae, Brownie sundae, Banana split sundae, American parfait, etc. The most expensive set of sundaes are created by Serendipity 3 restaurant in New York City. Each Serendipity Golden Opulence sundae and Serendipity Frrozen Haute Chocolate are priced at US$ 1,000 and US$ 25,000, respectively. These have broken the Guinness World record for the most expensive deserts.