Difference between Indian and Continental Food

Key difference: Indian cuisine encompasses a variety of regional cuisine native to Indian soil. Continental is a generalized term collectively referring to cuisines of Europe and other Western countries.

With the growth of globalization, people all across the globe have started to get accustomed and to enjoy the different variety of cuisines available.

Indian cuisine is one of the favorite cuisines of the people in countries. With the combination of different spices, vegetables and technique, the taste of the dish is highly elevated. Indian food is heavily influenced by cultural and religious choices. The development of Indian cuisine is believed to be shaped up by dharmic beliefs, and it is still evolving due to the nation’s cultural interactions with other societies. Indian cuisine reflects 5000 years of history of various cultures interacting within the subcontinent, leading to the diversity of flavors and regional cuisine found in modern day India. An Indian diet consists of fruit, vegetables, eggs, diary products, milk and meat. Over time, people have embraced vegetarianism.

The staple food of this cuisine includes bajra, rice, wheat flour and variety of lentils, especially massor, toor and moong. Lentils are used extensively. Indian dishes are cooked in vegetable oil, but peanut oil is more popular in the north and south regions, whereas mustard oil is commonly used in the eastern regions. Cuisine differs across regions, as a result of diversity in local culture, location (nearby to sea, deserts or mountains) and economics. It also varies according to the season, and the availability of fruits and vegetables. A few examples:

· Gujarat: Gujarati cuisine; is primarily vegetarian. A typical Gujarati thali consists of roti, daal or kadhi, rice, sabzi and papad. It varies widely on flavor and heat based on personal and regional tastes.

· Kerala: cuisine of Kerala; it blends local dishes with foreign ones to adapt it to local tastes. Coconuts grow in abundance in Kerala, so grated coconut and coconut milk are commonly used for thickening and flavouring. The long coastline and numerous rivers have led to a strong fishing industry in the region, making seafood a common part of the meal. 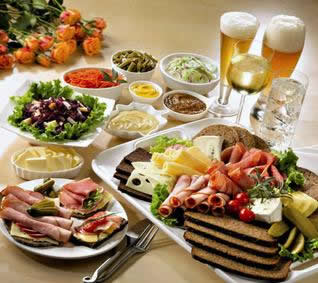 According to Wikipedia, the cuisines of Western countries are pretty diverse, there are a few characteristics that help distinguish western cooking from Indian and Asian cuisine. Compared with traditional cooking of Asian countries, meat is more prominent and substantial. Steak is a common dish across the west. Western cuisines put a substantial emphasis on sauces as condiments and seasoning. Many dairy products are utilized in the cooking process. Wheat-flour bread is the most common source of starch in this cuisine, along with pasta and pastries, although the potato has become a major starch product in the diet of Europeans. Maize is not common in their diets. Cornmeal or polenta, is majorly found in the foods of Italy and the Balkans.

Comparison between Indian and Continental cuisine:

you should give more explation

How come you concluded "most people are vegetarians" when India has only 15% of Forward Caste People (who dont eat meat). At least 70% people eat meat. Is it that only those 15% people diet is considered Indian?