Difference between JDK and JRE 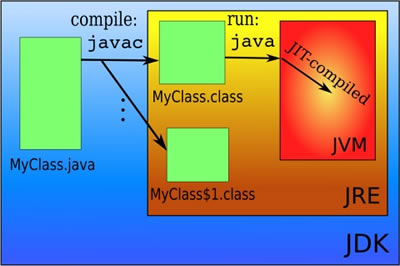 The JDK (Java Development Kit) is an oracle corporation product, which consists of all Java oriented programming components for Java developers. It is a former form of binary product aimed especially for Java developers, who actually operate on Solaris, Linux, Mac OS X or Windows. It was announced free by Sun on 17 November 2006, under the GNU General Public License (GPL). It became known and famous by its open source version, which was developed on 8 May 2007.

The JDK is a software development environment which is known to provide the developed Java programming facilities, such as the Java Runtime Environment (JRE), an interpreter/loader (java), a compiler (javac), an archiver (jar), a documentation generator (javadoc) and other tools needed in Java development. It is a program development environment for initializing the Java applets and its applications. It possesses the runtime components which lie on the top most of the operating system layers; also it is an essential tool for programming, developing, compiling, debugging and running the applets and applications written in the Java language. Initially, the java developers are provided with two types of JDK tools, they are: java and javac. Both run on the command prompt. The Java source executing files are simple text files, which are saved with a .java extension file format. After writing and saving the Java source code program, the javac compiler is invoked to create .class files. Once the .class files are created, the 'java' command can be further used to run the java program.

The JDK has a collection of primary programming tools and components, some of which includes:

The JRE (Java Runtime Environment) also stands for Java Runtime, is a part of JDK. It is a set of programming tools and components which are essentially applicable in Java developing applications. It facilitates the minimum requirements for executing Java applications. It mainly comprises of the Java Virtual Machine (JVM), core classes, and supporting library files. Originally, it was developed by the Sun Microsystems Inc., as a wholly-owned subsidiary of Oracle Corporation.

The JRE (also be written as Java RTE), is applicable only in the installed Java Runtime Environment components and applications and Java applets. It is applicable for multiple computer platforms, including Mac, Windows, and UNIX. The JRE is condition oriented, that is if JRE is not installed on any computer, then it might happen that the Java programs may not be recognized by the respective computer operating system. The JRE Software provides a runtime environment in which Java programs can be executed. It is available in both the forms as, a standalone environment and a Web browser plug-in, which allows Java applets to run within a Web browser. The latest JRE 1.0 has evolved with variety of classes and packages; these are included in the core libraries and have grown from a few a few hundred classes to several thousand in Java 2 Platform, Standard Edition (J2SE).

The JRE includes various forms of deployment technologies, some of them are:

Comparison between JDK and JRE: