Difference between Kiwi and Golden Kiwi

Key Difference: Kiwis are one of the most vitamin-rich fruit. It has an oval shape with an unique appearance consisting of a creamy green flesh and tiny black seeds that are edible for humans. Golden Kiwi is one type of Kiwifruit. It was mainly invented by grafting and cross-pollinating different types of kiwifruit. 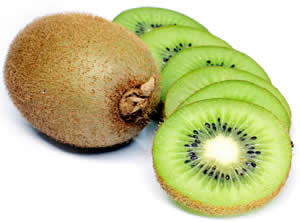 Kiwi, officially known as the Chinese gooseberry, is native to China where it has been affirmed a National Fruit of China. The Kiwifruit is borne on a dynamic, timbered, twining vine or climbing shrub reaching 30 ft (9m). There are different types of Kiwifruit like hayward, chico, saanichton 12, super hardy, golden kiwifruit, etc. All have little difference in their tastes. The fruits are nutritionally the same and are a good source of vitamin C, vitamin A and vitamin E. Kiwis are high in potassium, dietary, fiber, and antioxidants. Minimal processing like cutting and freezing, and short term storage does not affect the food value significantly.

It has an unique appearance consisting of a creamy green flesh and tiny black seeds that are very edible. It is an exotic fruit that has a wonderful flavor. For the sweetest, fullest flavor, choose plump, odorous kiwi fruit that yield to gentle pressure like ripe peaches. It is very helpful as a tonic for growing children and for women after childbirth. The best use of kiwi fruit is ice cream with sauce or slices. Kiwifruit is also used to give salads a unique and tropical flavor. 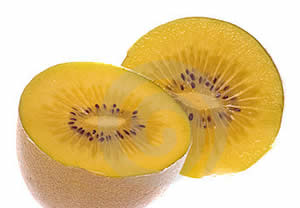 Golden Kiwi is a type of Kiwi. It is a modern cultivator of kiwifruit that was developed a little less than 15 years ago. Golden kiwi was mainly invented by grafting and cross-pollinating different types of kiwifruit. It has a smoother skin and a small nub or point on one end. The golden kiwi varieties are much sweeter, and the pulp is softer. Thus, people feel like they are eating a mushy fruit salad. The golden kiwi contains slightly more nutritional benefits than the green one.

Comparison between Kiwi and Golden Kiwi: