Difference between LED and LCD HDTV

Key Difference: An HDTV is nothing more that a TV that supports High Definition. HDTV usually comes in three types: LED, LCD, and Plasma television. LED TVs are actually a type of LCD TV that use LED lighting to create the images.. LCD TV stands for Liquid-crystal-display televisions. 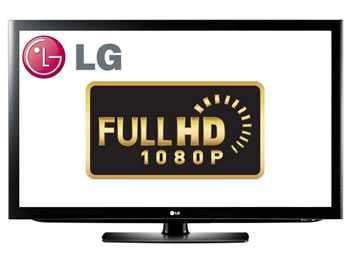 HDTV usually comes in three types: LED, LCD, and Plasma television. Plasma televisions were very popular once, however that popularity is now on the decline as LCD televisions are now much cheaper and better than plasma. Additionally, plasma runs high energy costs, and has a tendency to burn out, which means that they must be replaced sooner. Hence, many people now prefer LEDs and LCDs.

LED and LCD TV are different matter completely. Firstly, LED TVs are actually a type of LCD TV. LCD TV stands for Liquid-crystal-display televisions. They are television sets that use LCD display technology to produce images. LCD televisions selectively filter white light to produce a black and colored image. This gives them the benefit of more natural looking colors. 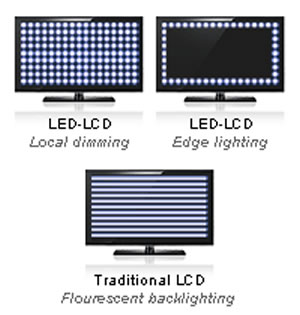 In LCD TVs, this light was provided by a series of cold cathode fluorescent lamps (CCFLs) which were placed at the back of the screen. However, this source of light was later changed to LEDs, i.e. light emitting diodes. In fact, most if not all LCD TVs today use LEDs for their back source light. This is in fact where the different names originate from. Still, nowadays there is no practical difference, as most

In LED LCDs, there are millions of individual LCD shutters that are arranged in a grid. These shutters open and close to allow a metered amount of the white light through. Each shutter is paired with a colored filter to remove all but the red, green or blue (RGB) portion of the light from the original white source. These RGB portions of the light then blend together to create a pixel of color. The shade of color is controlled by changing the relative intensity of the light passing through each shutter.

Comparing traditional LCDs to LED LCDs, the LED TVs tend to have a better picture quality, as it has full-array back lighting with local dimming. The individual zones of LEDs can be dimmed or brightened independently, making it more flexible and suitable to the viewer’s taste and preference. Additionally, LED TVs generally have better black levels and contrasts, as well as slightly better color accuracy. LED TVs are also slightly slimmer than traditional LCDs.