Difference between Longboard and Skateboard

Key Difference: Skateboard is a small board that measures approximately 3 feet in length and has a curved structure. A longboard on the other hand is significantly longer than the skateboard, measuring up to 4 and a half to 5 feet. 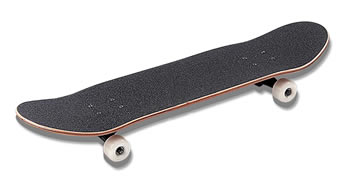 The age long discussion between what is harder, a skateboard or a longboard, has been plaguing extreme sports enthusiasts for years. However, if one ever suggests that both are same or similar, you would definitely make some enemies.

While on the surface, the idea of longboarding and skateboarding might seem the same, there are huge differences between the two. Both are even considered as completely different sports. Although, they have been derived from a similar background, a surfboard, they have evolved to be two different activities.

Skateboard is a small board that measures approximately 3 feet in length and has a curved structure. The nose and the tail of the skateboard is curved, allowing for a better grip for riders to flip the board and perform tricks. The board includes the deck, which is often taped with a rough paper-like adhesive that allows a sturdier grip, which keeps the rider from slipping off the board.

The skateboard is also created mostly for a park or a skateboard park, where it is used for riding on ramps and performing numerous tricks such as flips and spins. A longboard on the other hand is significantly longer than the skateboard, measuring up to 4 and a half to 5 feet. This board is also often pointed from the front and the back and is wider than the skateboard. The wheels are not underneath the board, but instead are placed at the very end and stick out with the pointed part being between them.

The longboard may or may not have a rough adhesive, but is sturdier because of its length and width. The longboard also does not require the rider to use the ground to push, but instead use the body to fuel the board. Longboard are most commonly used on flat concrete roads or downhill areas, where it is used to ride from one place to another and perform twists and turns.

Longboards can also be used to perform simple tricks such as flipping the board and barrel rolls, but it is more commonly used to surf the land, in other words for cruising.

The boards and the sport share nothing in common but the history, while significantly differing from each other in so many ways.

Comparison between Longboard and Skateboard:

I truly appreciate this forum.Really thank you! Cool.