Difference between Longitude and Latitude

Key Difference: Longitude and latitude are a set of imaginary lines that run across the surface of the earth. The longitudes run from the top, i.e. the North Pole, to the bottom, i.e. to the South Pole. In contrast, the latitudes run from the East to the West. 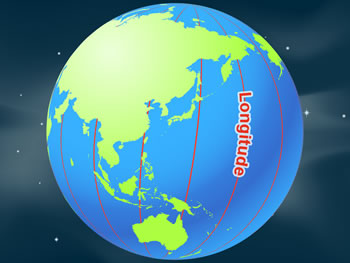 The earth is a large place; due to which it is often hard to pinpoint a location anywhere on the planet. In order to make things easier, and for people to be able to find their way; a new system was put into place, the longitude and latitude.

What are longitude and latitude? Basically, they are just imaginary lines that run across the surface of the earth. The longitudes run from the top, i.e. the North Pole, to the bottom, i.e. to the South Pole. They are a set of imaginary vertical lines that divide the Earth into segments in order to make it easier to pin point any location on the planet. In contrast, the latitudes run from the East to the West. They are a set of horizontal imaginary lines that serve the same purpose as longitudes.

The latitude measures 180° (degrees) in total. The center most latitude is the equator which is considered to be 0°. This divides the planet into two segments, the Northern Hemisphere, and the Southern Hemisphere. From the equator, 90 lines are on the top, and 90 on the bottom, totaling 180°. The top 90 lines are labeled as 90° or 90°N, while the southern lines are labeled as -90° or 90°S.

The longitude, on the other hand, measures 360° in total. The center most longitude is the prime meridian which is located at 0°. The prime meridian passes through Greenwich, England, as it is the location of the Royal Observatory. It unofficially divides the planet into the Eastern Hemisphere and the Western Hemisphere.  The rest of the meridians or lines of longitude are measured 1° apart from the Prime Meridian. From the prime meridian, there are 180 lines to the East, and 180 lines to the West. They are labeled as 180° or 180° E for the eastern lines, and -180° and 180°W for the western ones. 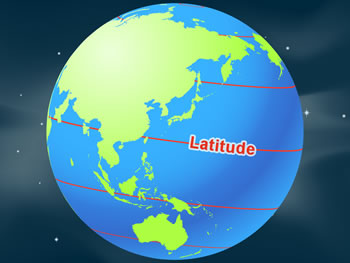 The exact difference between each of the lines is 1 degree, which translates to 69 miles. This is the same whether for longitude or latitude. However, it should be noted that as one moves north or south of the equator, the distance between the lines of longitude gets shorter until they actually meet at the poles. Hence, at 45 degrees N or S of the equator, one degree of longitude is about 49 miles.

Another difference between the two sets of lines is that the lines of latitude are parallel to each other, which means that they do not intersect at any given point, whereas the lines of longitude are not. The longitude all interest at both the North Pole and the South Pole where they originate and end, respectively.

Comparison between Longitude and Latitude: