Difference between Nginx and Unicorn

Key Difference: Nginx ‘engine x’ is a free and open source HTTP server that can also work as a reverse proxy server. It is also an IMAP/POP3 proxy server. Unicorn is an HTTP server designed for Rack applications. It has the capability to serve fast clients on specifications like low-latency and high-bandwidth connections. Unicorn is a rack type server, whereas Nginx is a pure web server.

Nginx is pronounced as ‘engine x’. It is a free and open source HTTP server that can also work as a reverse proxy server. It is also an IMAP/POP3 proxy server. Originally, it was written by Igor Sysoev in 2002. It was developed as a solution to the problem known as c10k in apache; to handle a large number of requests simultaneously. To solve this problem, Nginx structured itself in an event-driven mode. It is known for being lightweight and for being a high performance HTTP server.

It provides the basic HTTP server features like - serving of static and index files, modular architecture, SSL and TLS SNI support, etc.  All the network connections work in a non-blocking way. It is operated by a pre-set number of worker processes and each process executes as a single thread. One of the limitations attached with Nginx is that creation of modules is a difficult task. 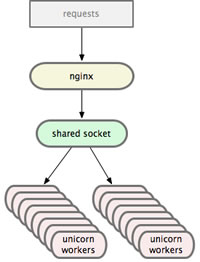 Unicorn is an HTTP server designed for Rack applications. It has the capability to serve fast clients on specifications like low-latency and high-bandwidth connections. It is a copyrighted free software. It can be redistributed or modified according to the terms of GNU General Public License. It also takes benefits of features in Unix/Unix-like kernels. In this server, load balancing is never an issue, as it is managed by the operating system kernel. It assists all rack applications. For slow clients, it works on a buffering reverse proxy.

It runs on Unix-like platforms, and thus it follows similar basic concepts of UNIX. Unicorn is basically a pre-forking server which means that a parent process listens on one port and forks a given number of children. It looks after the children by keeping a balance on the requests associated with them. It is most often used for Ruby applications. Standard Unix signals are used for interaction or communication with it. One f the biggest achievements of this server are that it takes zero downtime to restart.

To take the benefits of both, a set up is created that involves both of them. Nginx sends request to the Unicorn worker pool. The unicorn master looks after the workers during the time when operating system handles the balancing.

Comparison between Nginx and Unicorn: