Difference between Lying and Deception

Key Difference: Lying involves one person verbally telling another person something that is a false statement in an attempt to make the second person believe that what he is saying is the truth. Deceit or deceiving is saying or doing something with the intention of causing harm to another person.

Lying and deception are still extensively debatable topics in the field of Philosophy, where researchers are still coming up with many arguments that suggest both of the definitions may be similar or widely different. There are also many research papers that have been dedicated to this topic.

However, there are general definitions that are widely accepted, including the ones that are listed in the dictionary. Dictionary.com defines a lie as, “a false statement made with deliberate intent to deceive; an intentional untruth; a falsehood.” Deceive is defined as, “to mislead by a false appearance or statement; delude.”

The definition of lie basically states that when a person lies, he must verbally tell another person something that is a false statement in an attempt to make the second person believe that what he is saying is the truth. This can be half truthful and half false, but will still consider as a lie. There are also white lies, where a person may tell small lies that may seem insignificant when looked at the bigger picture, these include “making faces will make the face permanently like that”, “the existence of Santa Claus or the tooth fairy, etc.” 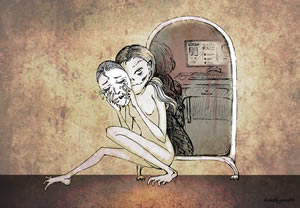 Deceit or deceiving is saying or doing something with the intention of causing harm to another person. These could include lying to someone or even excluding information from someone. It can also mean fooling something and can involve dissimulation, propaganda, and sleight of hand, as well as distraction, camouflage, or concealment. Street magic is an interesting example of deceit as in a manner the magician does perform by deceiving the audience in to believing us what he is showing is reality by using tricks in order to conceal his true means of doing something.

Another accepted distinction claims that a lie is a type of deception, while not all deceptions are based on lies. This is similar to banana is a type of fruit but not all fruits are bananas. Lying includes deceiving someone, while not all types of deceit are considered as lying. A person could intentionally leave out information, that can result in deceit but it won’t be considered lying. Similarly, magic would not be considered as lying. If the magician says I’m going to make a particular object disappear, he is not lying. He is making the object disappear, but he is deceiving the viewer by using a trick. A lie can be told for the benefit of someone, while deceit is not always done with good intentions. However, magic is an exception of this.

Comparison between Lying and Deception: