Difference between Median and Average

Median and average, these terms are widely used in many fields. However, they are basic tools used in calculations in  the field of mathematics and statistics specifically. Median defines the middle number of the group, when the group is arranged or ranked in order.

Median is simply the middle number in the list, but to use median, the numbers or group members must be defined or listed in rank or sorted order. In case, the provided list does not contain members in rank order, then the numbers should be first rewritten in rank order. When the number of members is odd, simply the middle member is selected as the median. On the other hand, if members are even in number, then the average of middle two numbers is considered to be the median. 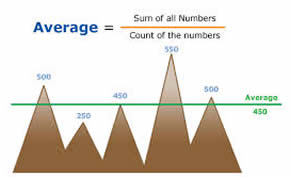 On the other hand, average is derived by simply adding all the numbers of the group and then dividing this added value by the total number of members in the group. It is also known as arithmetic mean or average.

Let us consider an example –

To find out the average, first we just need to add all the numbers in the list –

The middle term in this case would be 14, as it falls right at the middle.

Comparison between Median and Average: