Difference between Mitosis and Amitosis

Key Difference: Mitosis is a process in which the cells separate their chromosomes into two identical sets. Amitosis is when there is a lack of mitosis in the cells.

Life is beautiful, and complicated. It is amazing how things grow, change and evolve. One of the ways they do this is through the process of mitosis. Mitosis is a regular part of the cell cycle. The cell cycle is basically a series of events that lead a cell to its division and resulting in creating two daughter cells.

Mitosis is the actual process in which the chromosomes in the cell nucleus separated into the daughter cells. In mitosis, these daughter cells are exact replicas of the parent cell. This happens due to the fact that during the split, the chromosomes in the cell nucleus are separated into two identical sets of chromosomes, each in its own nucleus. Mitosis is then followed by cytokinesis, which divides the cytoplasm, organelles and cell membrane into two new cells containing roughly equal shares of these cellular components. All these parts then grow into their own cell, which are identical to each other and to the parent cell.

Mitosis is just one of the ways that the cells divide to create the daughter cells. Another way in which the cells replicate is called amitosis. Amitosis, basically, translates to ‘no mitosis’, which means that anytime a cell separates, but did not do so through mitosis, it instead went through amitosis. As any process that does not directly resemble mitosis, is termed as amitosis. However, over the years a number of processes that were termed as amitosis, have since been re-classified as closed mitosis, another form of mitosis. 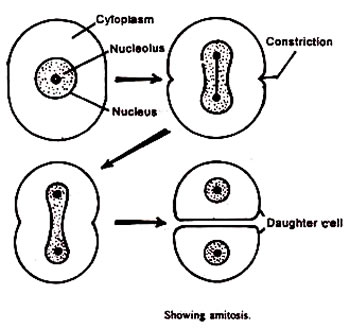 Still, the basic definition that encompasses being classified as amitosis is when a parent cell produces two daughter cells, but those daughter cells are not identical to each other or to the parent cell. Amitosis is also sometimes called as direct cell division. In amitosis, the cell and its nucleus split straight down the middle into two half. However, unlike mitosis, these are not identical. Furthermore, there are no complicated changes in the nucleus that occur during the ordinary process of cell reproduction.

Amitosis also refers to a state where a cell has lost the ability to perform mitosis. A variety of cells lose their ability for mitosis, especially once they reach adulthood. This often happens in the human body. For example: the cells in the cardiovascular system lose their ability for mitosis; hence, when they are damaged, such as in a heart attack, they cannot repair or replace themselves. Whereas, the skin cells continue to replenish and replace themselves all over their and our lifes.

Comparison between Mitosis and Amitosis: