Difference between Mono and Stereo

Mono is a prefix that depicts one, only or single. Hence, one gets an idea of monaural or monophonic sound reproduction. It uses a single channel to reproduce sound. In order to capture sound in a mono format one only needs one microphone, one loudspeaker or headphones. It is the simplest form of way to record sound and play sound.

In real life, we hear sound through our left and right ears. Our brain then interprets the sound to let us know how far away the sound is coming from and what direction it's coming from. Hence, we can pinpoint the source of the sound. Stereo mimics this and by listening to stereo sound, we can get an almost real and 3-D sound perspective. Hence, stereo makes for a better and more real sound experience than mono. The term ‘stereophonic’ also applies to "quadraphonic" and "surround-sound" systems as well as the more common 2-channel, 2-speaker systems. 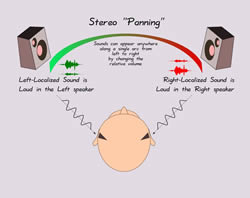 According to Wikipedia, stereo sound creates as illusion of direction and perspective by “using two or more independent audio channels through a configuration of two or more loudspeakers in such a way as to create the impression of sound heard from various directions, as in natural hearing.”

Mono was once the most common way to depict sound, however, mono has been replaced by stereo sound in most entertainment applications. Mono is still used by those who only require a simple way to depict sound, mainly for radiotelephone communications, telephone networks, and audio induction loops for use with hearing aids. Some of the main reasons for this is incapability for stereo, as stereo requires more equipment to record and depict, which also make stereo more expensive. Also, sound recorded in mono requires less disk space to record and save.

Furthermore, mono has a slight advantage in signal strength over stereo of the same power. This make it preferred for broadcasting talk radio shows. However, radio also broadcasts in stereo, especially for music channels. Like radio, TV recorded music and the cinema are able to broadcast in mono and stereo, however stereo is the more preferred format, as it is considered to give a better sound experience.