Key Difference: Motorola Moto 360 is the flagship smartwatch for Google and has been launched by collaboration of both the companies. Asus ZenWatch is Asus attempt to enter the relatively untapped smartwatch market. 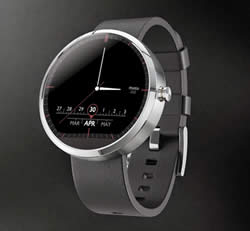 With technology increasing at a fast pace, trends are now shifting at a similar pace to keep up with the technologies. The trend has now shifted from having in the user’s hands to on his wrist as a wearable. The demand for smart wearable technologies is at a high, with major smartphone companies trying make an impressionable product. This has become even easier with Android introducing the Android Wear OS, made specifically for smartwatches.

Motorola Moto 360 and Asus ZenWatch both run on the same Android Wear operating system. Unlike smartphones, stripping and adding to the Android OS, is not allowed on the smartwatch. So, much of these watches run on the same OS. The major difference lies in additions that the company makes, such as sensors, compatibility and hardware.

Motorola Moto 360 is the flagship smartwatch for Google and has been launched by collaboration of both the companies. The company has opted to deter from the same old square shapes that are shows in Sci-Fi movies and stuck to a more ‘watch-like’ shape. The round shape gives it a more comfortable feel and it comes with two straps: steel and leather. Moto 360 comes with IP67 rating, which means it can worn in the shower and can be taken for a swim for 30 minutes.

The 1.56in screen with a round bezel is cut off slightly from the bottom, to hide the sensors and has a traditional crown, which can be pressed to turn the screen of and on. However, a person doesn’t have to use the crown and can simply turn their wrist or tap the screen to bring the screen back to light. Moto 360 has Bluetooth 4.0 Low Engery, 4 GB of internal storage and 512 MB of RAM and has replaced the standard Qualcomm Snapdragon with a Texas Instruments OMAP 3 chip.

The screen comes protected with Corning Gorilla Glass 3 and the phone offers sensors such as accelerometer, gyroscope, barometer and heart rate. The battery is touted to run for approximately a day, but multiple benchmarks suggest that the battery only lasts around 15 hours or so, depending on usage. The company offers two ways of interacting with watch: using the touchscreen or voice navigation. Voice navigation works flawlessly with Google Now. Watch faces that are offered are limited and not customizable, but more can be downloaded from the PlayStore. 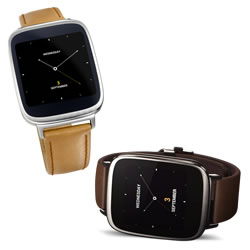 Asus ZenWatch is Asus attempt to enter the relatively untapped smartwatch market. The ZenWatch follows the other smartwatches and opts for a square shape, but adds its own little twists. Although square, the watch comes with rounded edges and a curved screen. It’s relatively smaller, as opposed to other smartwatches on the market. ZenWatch runs on the Android Wear operating system, but Asus has also incorporated nifty features such as Asus ZenUI integration, Watch Unlock, Cover to Mute, Find My Phone, Find My Watch, Flashlight, Compass, Asus Remote Camera App and Asus Wellness App.

The watch offers 1.63-inch 320 x 320 AMOLED display, protected by Corning Gorilla Glass 3. The AMOLED screen comes with all of its features such as deep black color, wide viewing angles, and that iridescent glow in the dark. Similar to all smartwatches, fitness functionality is incorporated into the watch. It offers sensors as well as the Asus Wellness app and Up by Jawbone app that combine together to present us with useful data and information pertaining to our lifestyle.

The phone performs the function of telling the time and has an ambient feature that constantly shows the time on the watch, but at the expense of battery power. Turing it off will result in the screen to black out, which can be revived using a tap to the screen or moving the wrist. Unlock Phone is another feature which allows the phone to remain unlocked when it detects the watch nearby. However, this reduced battery power immensely and thankfully can be turned off. The watch also doesn’t allow holding calls using the watch, but the user can accept or reject the call from their watch.

Comparison between Moto 360 and Asus ZenWatch: