Difference between Ebola and Marburg

Key Difference: Both the Ebola virus and the Marburg virus are types of the hemorrhagic fever virus that cause severe illnesses in humans. Their symptoms are nearly identical to each other thus making diagnoses difficult. 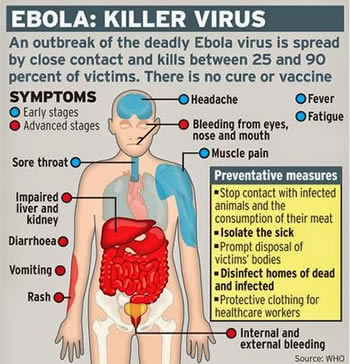 Both Ebola and Marburg are mainly prevalent in Equatorial Africa; however the diseases can be easily transmitted across borders. In fact, the first noticed case of Marburg was in the German cities Marburg and Frankfurt and the Yugoslav capital Belgrade in the 1960s. Ebola, on the other hand, was discovered in 1976 near the Ebola River in what is now the Democratic Republic of the Congo.

The diseases are often hard to diagnose and are often confused as each other as well as other viral hemorrhagic fevers, falciparum malaria, typhoid fever, shigellosis, rickettsial diseases such as typhus, cholera, gram-negative septicemia, borreliosis such as relapsing fever or EHEC enteritis, and many others. The incubation period of both illnesses is between 2 and 21 days, and the initial set of symptoms is practically identical. The early signs and symptoms include fever, severe headache, joint and muscle aches, chills and weakness. As the patient deteriorates, the symptoms may also include nausea, vomiting, diarrhea, bloody stool, red eyes, raised rash, chest pain and cough, stomach pain, severe weight loss, as well as internal and external bleeding.

Both the diseases are transmitted through contract with either their carriers, the bats, or through close contact with the blood, secretions, organs or other bodily fluids of infected animals or other humans.

As the symptoms of both the diseases are nearly identical, the only way to diagnose the illnesses is either through the patient’s travel history (to see if he has been in a risk prone area) or through isolating the virus or the antibodies for the virus in the patient’s blood. However there is still no vaccine for the diseases.

Comparison between Ebola and Marburg: