Difference between Nebula and Nebulae

Key Difference: ‘Nebula’ is a singular term, and ‘nebulae’ is a plural of nebula. Nebula is referred for extended objects consisting mostly of gas and dust. 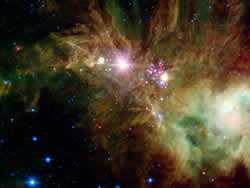 ‘Nebulae’ is the other name for Nebula. Nebula is a singular term, and ‘nebulae’ is the plural of nebula. Thus, it has a same meaning or description. So, the following content is referred for both the terms: nebula and nebulae.

Nebula is a cloud in deep space consisting of gas or dust. Example: A cloud formed after a star explodes. The word Nebula has been derived from the Latin word, meaning “cloud”. In the earlier time, galaxies were also called nebula by astronomers because of their fuzzy appearance. However, nowadays the word nebula is referred for extended objects consisting mostly of gas and dust. The “Pillars of Creation” is the most famous images of NASA’s. It comes in many shapes and sizes and forms in many different ways.

There is no difference between nebula and nebulae, thus the description, types, etc. will be similar.

Comparison between Nebula and Nebulae: