Key Difference: Niagara Falls are the waterfalls located on the Niagara River. They comprise of three waterfalls- The American Falls and Bridal Veil in the United States of America and the Canadian ‘Horseshoe’ that falls in Canada. Iguazu Falls are one of the largest waterfalls in the world. They are situated on the border between the Brazilian state of Parana and the Argentina province of Misiones. Iguazu Falls are taller and wider than in comparison to Niagara Falls. 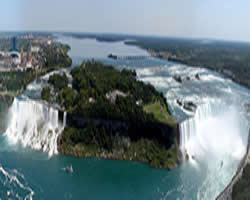 Niagara Falls consist of three separate waterfalls. Two of the waterfalls are situated in the United States and one is located in the Canada (American Falls, Bridal Veil Falls and Canadian/Horseshoe Falls). The Bridal Veil is the smallest among them. In 1950, a treaty was signed between the United States and Canada regarding the amount of water that could be diverted from the river for various projects related to the power generation. 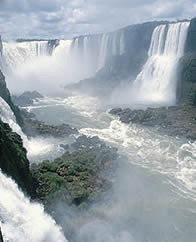 Iguazu Falls are situated on the Argentina- Brazil border. These falls are spread over nearly two miles of the Iguazu River. They comprise of various cataracts on the Iguazu River. These falls get divided by various islands, and thus various separate waterfalls are generated. One of the famous waterfalls is known as the Devil’s Throat. Niagara and Iguazu Falls are often compared to each other.

Both these Falls vary in many aspacts like width, height, elevation, etc. However, both are major tourist attractions, and thus a number of people visit these tourist destinations.

People wanting to visit Iguazu Falls can take an easy and fast flight to FOZ DO IGUACU, a brazilian city that has the best structure to host visitors. From there you can take the bus to the brazilian side one day and another bus to the argentinian side the other day. It is all very cheap, easy and fast. That thing about 16 or 20 hours to reach the falls is non-sense.

Iguazu Falls are not difficult to access. The 22 hours ride from Buenos Aires apply to buses, but you could easily fly from Buenos Aires to Puerto Iguazu in 90 minutes. The walkways in Argentina are not called "passeios inferiores". In Argentina you have the "upper trail" and "lower trail", as well as a train (Magic Kingdom like) that takes you near the Devil's Throat.