Key difference: Nintendo Wii and Wii Mini are newer versions of Nintendo. Out of which, Wii Mini is Nintendo's recent redesign of the Wii console.

Nintendo Wii is the seventh-generation game console, which was released on November 19, 2006. Wii is an advanced built-in gaming system, with external hardware development connections. The design and structure of Wii focuses more on the demographic features of the game.

Nintendo Wii has an incredible compact system feature, which is portable to use. It is Nintendo's fifth major home console. The Nintendo Wii is a stand-alone vertical system and consists of extra hardware features. The entire system needs to be connected to the television externally and hence this feature enables the users to view the game on the big screen. The Wii Remote-controller is used handheld by pointing towards the device. It further detects the movement in three dimensions and works on motion sensing technology. To insert a game, there is a large slot on the front of the system surrounded by a glowing blue neon light. The slot can accept the 8 cm discs used by the Nintendo Game Cube and the standard 12 cm discs of Wii games. The Wii system also provides the fascinating feature of the game downloading services, which are pre-defined in the system. These services are called “Virtual Console”, and feature emulated games from the past systems. The Wii system supports wireless connectivity with the Nintendo DS without any additional accessories. This connectivity allows the player to use the Nintendo DS microphone and touch screen as inputs for Wii games. Another notable feature of the console is WiiConnect24, which enables the system to receive messages and updates over the Internet while in standby mode. 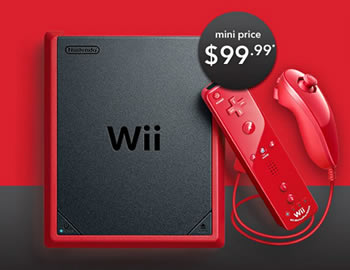 Nintendo Wii Mini is a smaller redesign version of Wii. It was reconstructed by Nintendo, in order to reduce the cost and increase market share. It was first released in Canada on December 7, 2012. The Wii Mini has its own version of the Wii's system software, and which consist of its own features.

Multiple features have been removed from Wii, in order to reduce the price. The removed features includes: Internet capabilities, Game Cube controller and memory card ports, and the ability to read Game Cube games were removed, and it is no longer possible to play in enhanced-definition (480p). The Wii Mini has its own version of the Wii's system software, with a modified setting menu. The system does not have backward compatibility. There is no SD card slot in the newer Wii Mini system. The hardware of the system consists of a red Wii Remote Plus and Nunchuk controller. The Wii Remote Plus controller is the key supporter for the motion gaming experience on the console. It responds to motion and rotates in accordance to enhance the control as the players swing, swipe, thrust, or turn. Wii Remote Plus enables the console and its system to become more active and immersive. There is an additional feature, while playing the game, that is; if the game is to be played with more then two players, than they are supposed to gather the additional controllers. As the new derived Wii Mini console does not support to the Internet, the extra online games canot be exported and hence it exclusively supports only the Wii games.

I actually own a wii mini and a 3ds. Even thougth the wii mini does not support internet connection and game cube games I still love it because it was my first console and I have great games in it...