Difference between NoSQL and SQL database

There are many different types of databases in use today. SQL Databases have been and still are some of the widely used databases out there. Some other popular one in use are MySQL, Oracle, as well as some other types of SQL databases. However, recently NoSQL databases, such as MongoDB, have been gaining popularity. Both SQL and NoSQL databases serve the same purpose for the post part, which is to act as a database, i.e. collect and organize data.

The primary difference between the two is the fact that SQL databases utilize SQL, i.e. Structured Query Language as the standardized programming language for managing relational databases as well as for performing various operations on the data in them. Whereas, NoSQL databases typically do no use tabular relations for storage and retrieval of data that are common in relational databases. Instead they are document based that store key-value pairs, graph databases or wide-column stores. NoSQL are focused primarily on the collection of documents. It is also due to this that NoSQL are ideally used to store large set of data which are commonly stored in JSON documents. 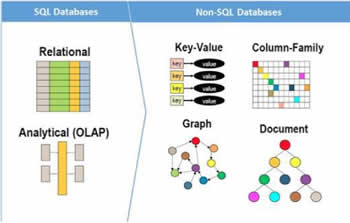 Basically, this means that while the SQL databases represent data in the form of tables, NoSQL databases show key-value pair, documents, graph databases or wide-column stores, all of which do not have standard schema definitions that need to be followed. SQL databases, on the other hand, have to stick to a predefined schema.

In addition to these, there are various other differences between the two. The benefit of NoSQL over SQL is the fact that it is more variable and can be adapted to fit any need. Whereas, SQL has typically been more structured and less adaptable.

Comparison between NoSQL and SQL database: